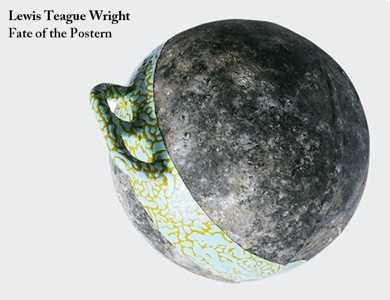 Conceptually, Teague Wright’s work begins with ideas relating to cartography and geography, by extension the occupation and surveillance of this geography, and the visual cues of ownership of it too, i.e. This is not a Romantic-pastoral vision of the geographic world though, as Teague Wright’s practice and vision of nature is mediated and explored through technology. In Live From Distant Shores, exhibited at the Barbican Centre in 2011, Teague Wright presented three large screens showing streamed surveillance footage of unknown ports, where as night fell on the Barbican’s artificial lake, the sun rose over the far-away aquatic landscapes. At the other end of his practice, at his works most spatial, was the show Perfidious Gleam, with artist Jack Bechtler, Teague Wright transformed Recession Studios through the use of light and an aluminium reflective sculpture. The reflective surfaces were splayed with rows of flags, a common visual symbol in Teague Wright’s work.

The flag is a visual substitute for physical ownership, and works too, as an easy (appropriate) emblem for Teague Wright’s work. This is especially relevant in relation to his new show, Fate of the Postern. In 2011 people using Google Earth began to notice large, abstract chalk shapes in the steppes of the Gansu Province of China, a green light for conspiracy theorists; they were posited first as alien signals, then as a map of Washington DC for Chinese bombers to practice on, before finally being confirmed as a calibration grid for Chinese spy satellites.

In Live From Distant Shores, where Teague Wright was interested in the surveillance of the unremarkable, he is here reconfiguring this interest in land that is primarily used to facilitate surveillance. The land and it’s marking are transmuted in Teague Wright’s work, turned into a steel sculpture, which is left to hang precipitously in the middle of the gallery. The sculpture is paired with a large sheet of aluminium, beaten to resemble the contours and topography of land, sitting adjacent to the sculpture, propped against the gallery wall. Despite the aluminiums obvious analogue to the desert landscape upon which the shapes were found, both sculptures are non-specific abstractions of geographical features. Teague Wright’s work often works around ideas between the figurative and documentary aspects of representation; taking a documentarians eye for the peculiar, strange and fascinating, and then re-presenting it, as if to include the tag line that prefixes films, based on a true story.

And like a film with an omniscient narrator, the imposing materials and size of the sculptures gives the viewer the vantage of being able to see Teague Wright’s transfigured landscapes from an improbable, god-like position. In Fate of the Postern, the representation of marking / landscape are physically removed from each other, sitting in different parts of the gallery. It is the natural world reconfigured by the use of man-made objects, further taking Teague Wright’s work away from the idea of the nature as a Romantic idyll, or sublime fascination in its imposing landscapes.

Fate of the Postern is the first in a new series of works that will pick up on the shows themes. Titled Momentary Monuments it will explore Teague Wright’s fascination with the de-environmentalisation of objects and artefacts from their natural, camouflaging setting, and re-presenting them, without the context of the landscape to define them.