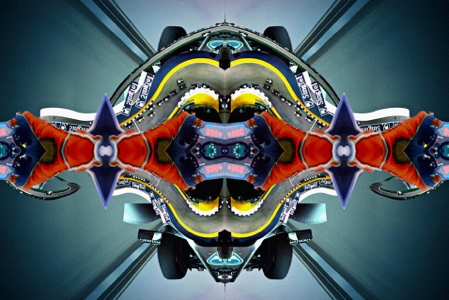 Three projects in the exhibition are New York debuts: Mark Napier’s net.flag: ten years of flags, comprised of nearly 23,000 flags created by visitors to the net.flag website; Marina Zurkow’s The Thirsty Bird, an ecologically-charged animation informed by a recent residency in Houston, Texas; and Marco Brambilla’s RPM, a psychological video portrait of a Formula One driver’s point-of-view. The line between man and machine is blurred in Marco Brambilla’s 3D video collage.
There is no beginning or end in RPM, just an accelerating trajectory that has no specific destination, compressing time and reflecting the elevated mental state necessary to maintain control under extreme pressure. Brambilla states: “I wanted to capture the sense of being on the very threshold of the limits of control – the feeling of euphoria and danger which are equally present in the mental state of a driver during a race.”

In 2002 Mark Napier became one of the first artists commissioned by a major museum to create an online work for its collection. net.flag is a flag for the Internet: a single flag on a webpage, an interface, a volatile mash-up of international flags. Any visitor can change the flag by choosing and arranging pieces of the international flags. On February 18, 2002, the project opened on the Guggenheim Museum website, and in the next ten years visitors to the site created almost 23,000 flags. Each flag lasts minutes, hours or days until the next visitor alters or overwrites it with their own political vision.

Starting shortly after 9/11 and ending in the aftermath of Arab Spring, the project net.flag: ten years of flags spans a period of upheaval in which national boundaries have been redrawn and reconceived, enabled in large part by the transformative nature of the Internet, the web, and social media. In Marina Zurkow’s most recent animation, the movement of a pump jack (known colloquially as a “thirsty bird”), and a public water fountain are synchronized in a delicate dance. As the pump pulls oil upward, the water fountain spurts water. An array of archetypal individuals-cowboys and Indians, a father and his son, a county sheriff, a cow, a soldier, a girl with her dog-emerge in endless succession to drink from the fountain. The graphic treatment is based on Gerd Arntz’ ISOTYPE (International System Of Typographic Picture Education), developed with Viennese social scientist and philosopher Otto Neurath (1882-1945) as a method for visual statistics.

Utilizing methods of public intervention and video installation, Daniel Canogar’s Asalto is a projection thatsymbolically releases our fantasies of overcoming imposed obstacles in our lives. Engaging individuals as spectators and participants, a staged interaction takes place between a “stormed” site and collected imagery of a virtual public. In the work’s process of production, participants are invited to crawl across a horizontal green screen, as if they were climbing up a wall. This filmed action is later projected onto a facade. As the video progresses, the recordings accumulate and the number of individuals appearing in the projection increases. The piece exists alternatively as an outdoor live work, or as an indoor projection that functions as digital wallpaper. In either case, Asalto is born from a desire by the artist to have viewers project themselves, literally and metaphorically, onto their immediate environments.

Yael Kanarek’s creative practice centers on the fundamental hypothesis that language and numerals render reality, and that this reality is an entirely subjective unified field. Her work enters spaces of meaning determined by a global network and the negotiation of identity that occurs when confronted with multiple systems. Employing modes of authorship such as storytelling and multilingualism, Kanarek manipulates the biographical predisposition of cultural associations. Her largest text work to date, Wavelength range of roughly 630-740 nm, No. 7 points to the curious working of the heart and mind, as light waves hit the retina and are processed in the brain. “In” comes the light wave, activating a range of sensations and emotions; “Out” comes the word Red in sound, shape, and cultural reference: Hebrew – Adom (transliteration) Arabic – Ahmar (transliteration) Yiddish – Royt (transliteration) Spanish – Rojo English – Red Diptychs in the Process 18 series by Casey Reas use line as a primary form.

The behavior of line in these pieces is guided by the artist’s instructions. Reas’ approach to writing computer code is akin to Sol LeWitt’s authorship of instructions for wall drawings, but generative software procedures replace the human hand. Also influenced by earlier artists and thinkers working within systemic conceptual frameworks such as Euclid, Lissitzky, and Haacke, Reas focuses on relationships between dynamic elements. “Using grey scale and static images, the formal attributes of a system are reduced,” says Reas. “Introducing a kinetic field of action or a color representation of the system will present the viewer with higher complexity.” Seen as a collective, the generative and serial nature of Reas’ instructions is rendered visible, and another viewpoint of the system emerges.

The work of Tim Knowles is focused on process but maintains a spirit of experimentation by incorporating elements of chance and randomness. In his series of Tree Drawings, nature is an active participant in the creative process. By attaching drawing instruments to low-hanging tree branches, Knowles records a tree’s natural motions in the wind, as well as its moments of stillness. Each drawing acts as a signature, revealing the unique qualities and characteristics of the tree. This particular tree drawing was commissioned for “Verdant”, an exhibition at MassArt in Boston MA, and was produced locally in Fall 2011.

New video work goes live on 21 screens, with one measuring 4 stories tall and another 280 feet long.