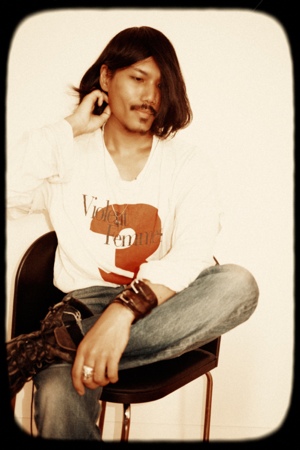 FAD caught up with Skye Nicolas an artist based in New York whose new dollar art works ‘Buy Some Love’ are causing quite a stir across the pond. People have been paying over $2,000 for the $1 version. Moises de la Renta has been tweeting about his $1 Buy Some Love and other purchasers have included a wealthy Russian art collector. 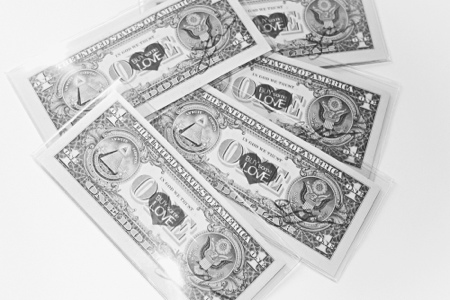 Buy Some Love questions and challenges the concept of value and property, revealing playful irony and humor in the idea that an artist is capable of reassigning value, and in fact increasing the monetary value of actual currency, simply by transforming it into collectible art. Modern society seems to have been enslaved by the financial system, feeding on the visceral impulse that wealth can buy just about anything

1.If you weren’t an artist, what else would you be?
A profligate venture capitalist with a penchant for collecting exorbitantly priced art, albeit impossible to maintain. (That also doubles as a colorful description of some of the people who have purchased my work)

2. Can you tell us more about your work and what are the main ideas you would like to express?
I’m fascinated with what I refer to as a living transmedia consciousness: this idea of a fully plugged-in social network culture that engorges itself on mass produced imagery and information. It advocates corporate brand worship and assimilation to a hyper-consumerist ideology as the core of a popularly accepted way of living in the 21st century. My work investigates the multiple new modes of presentation via the consummation of technology and new media, often responsible for strategically exploiting the insatiable appetites of consumers in a profit-driven society.

3. How do you start the process of making work?
Countless hours online, reading several books at a time, observing, scheming, gesturing, till an idea starts to form. To the degree of which I am satisfied with the initial concept, I’ll make adjustments here and there to strengthen the idea’s foundation while ruminating on the finer details of execution. Otherwise, I discard it immediately and do something else unrelated to work. Some of the best inspirational moments happen inadvertently when you’re in a relaxed state and not consciously thinking about work.

4. Do you consider the viewer when making your work?
Only if the piece specifically requires it.

6. Name 3 of your least favourite artists.
I pay no attention to people whose work does not interest me.

7. What defines something as a work of art?
Something that comforts the uneasy, and makes the comfortable uneasy.

8. In times of austerity, do you think art has a moral obligation to respond topically?
Not necessarily. Highly priced readymades for example, consisting of ordinary industrial cardboard boxes sold for €30,000 euros a piece at the most recent Frieze New York art fair is clearly not a manifestation of moral obligation. Ideally, modern contemporary art in general should be free from creative constraints and rigid guidelines if its goal is to ultimately present work that is objectively authentic. As long as there are people who are willing and able to buy just about anything for whatever the price, anything goes.

9. Anytime, any place – which artist’s body would you most like to inhabit?
The idea of inhabiting someone else’s body doesn’t sound appealing to me. To entertain such a thought would be like legitimizing the phenomenon of demonic possession to the satisfaction of a sanctimonious Catholic church. Bad idea.

10. What is your favourite ‘ism’?
Hedonism

11. What was the most intelligent thing that someone said or wrote about your work?
“Conceptually rigorous and intellectually challenging, the work is also visceral to offer viewers an almost instant emotional lift… viewers are relieved — even rewarded — by the simplicity of these shiny ephemeral reflections on banal festive objects.” — Cay Sophie Rabinowitz

“A recipe to maintain the critical distance? As Skye Nicolas, one of the currently most inspiring contemporary artists would put it, it is by simply sleeping with fashion models, and staying away from reality TV. Fair enough, specially when it comes from a man who clearly has passion for qualitative provocation.” — Danaja Vegelj

“You my friend, seem to be a swordsman of great deft and hair length.” — Marlon Richards

13. Which artists would you most like to rip off, sorry, I mean appropriate as a critique of originality and authorship?
Richard Prince. A perpetual meme filtered through the king of appropriation art.

14. Do you care what your art costs? State your reasons!
People who are serious about buying art these days like to show off their pricey acquisitions especially when these objects are attached to intimidating price tags. The purchase itself becomes a spectacle, garnering more attention if the art piece borderlines what most of the practical world would consider ridiculous. In this case, the art work is merely a vehicle to reveal the buyer’s intrinsic intention; it is the purchase that makes a self-validating statement by boldly proclaiming “I bought this piece simply because I can!”.

Understanding and embracing the business aspect of art is just as important as the process of creating it. The value of your work is reflective of the people who support it. I value my work as much as I am grateful to those who can afford to buy it. 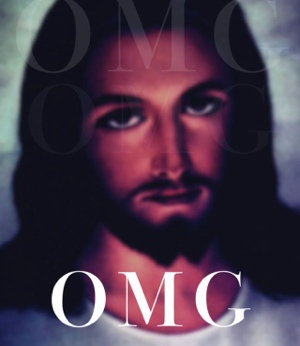 15. If Moma and the Tate and the Pompidou wanted to acquire one of your works each, which would you want them to have?
An OMG triptych for the Moma, a specially designated room covered in “Buy Some Love” dollar bills for the Tate, and one of the towering video projection installations from the Giant Robots series (a tribute to the Fukushima nuclear disaster victims), would work well at Pompidou.

16. What’s next for you?
I’ll be directing a series of fashion films in collaboration with a gaggle of wonderful industry personalities, conceptualizing a limited edition designer swimsuit – to be sold exclusively at a concept store famous for serving more than 100 brands of bottled water, guesting as a musician and co-producing a friend’s debut solo album, busying myself with more collaborations to keep the creative fire ablaze. 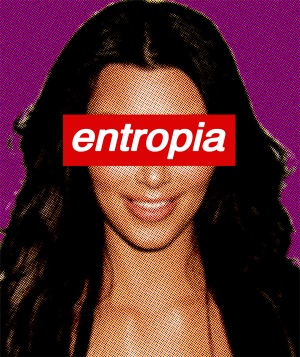 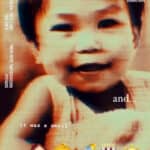 Down the NFT rabbit hole and Blockchain Immorality: An interview with Skye Nicolas

erviewed post-conceptual artist, Skye Nicolas. And with the recent rise in NFTs (non-fungible tokens), it’s not surprising that the New York-based artist has been busy creating innovative digital artworks while firmly establishing himself within the burgeoning NFT community.