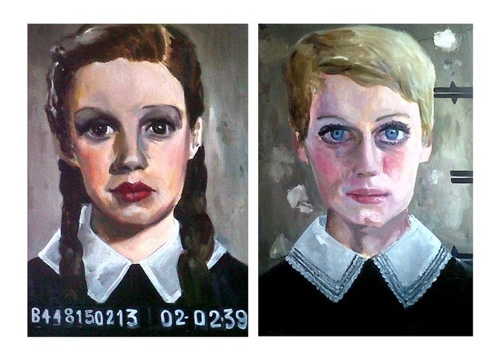 Spanning a diverse range of media, styles and tactics, the exhibition explores ideas and motifs that circulate around the themes of fracture and disruption; from the contested surfaces of Davina Semo’s reification of the contemporary urban aesthetic, to Dawn Mellor’s disruption of the stereotypes circulated by the global media and Jake & Dinos Chapman’s employment of formal tactics to undercut naïve, received ideas about the hermetic character of human agency.

Alberto Garcia Alix (León, b. 1956) is one of the most important figures in contemporary European photography. Garcia-Alix has documented life in Spain from the Franco era, to La Movida Madrilena that followed it, to the present day. He has consistently focused on those who live life on the margins.

Diann Bauer’s (New York b. 1972) large-scale paintings and drawings perform like installations, formally echoing the overpowering nature of the political rhetoric that forms the raw material for her content. Bauer’s subtle use of the crude, overheated language of the US right-wing comprises an particular investigation into the intersection between language and power.

Jake & Dinos Chapman’s (Jake b. 1966, Dinos b. 1962) pursue a rigorous, philosophical program of pessimism articulated through the strategic and tactical use of the medium of contemporary art.

In her images Dawn Mellor (born 1970 in Manchester, lives and works in London) deconstructs the interactive structure of the cult of celebrity – which appears in our culture to have been elected as a substitute for religion – by means of black humour fabricating a relationship between star and his/her believer, the fan. In so doing the artist herself frequently takes the role of an obsessed follower. Through a frequently self-chosen “painterly” role Mellor destroys the moral codes communicated through mass entertainment vouching for a deliberated immorality. Whereby in the face of the obsessive image worlds the question is also continually asked about the actual standardised taste of the observer and its verification. Mellor’s painting style is simultaneously fed by surrealism, the colourfulness of Pop Art and the intentional bad taste of a Joe Coleman.

Eva Räder (Ochsenhausen, b. 1978) approaches painting from two points of view: as a search for the distilled essence of visual perception, and as a narrative structure to order impressions of the realms of space, time and intuition.

Imbued with an appearance of scientific rationality, Conrad Shawcross’s (London, b. 1977) sculptures explore the territory where geometry and philosophy, physics and metaphysics meet.

Davina Semo’s (Washington, b. 1981) combines a neo-minimalist formal language with the materials and aesthetic of the contemporary urban environment, utilizing, concrete, glass, chains and spray paint, to create a succession of surfaces that speak with a brutal beauty.

Ralf Schmerberg (Berlin, b. 1965) is an artist and filmmaker widely known for his art projects such as Poem, Holy Wood, Dirty Dishes and many more. A true visionary, he is also the initiator of the Table Of Free Voices, Dropping Knowledge and Problema as well as the founding member of the Mindpirates collective.

Bicameral, a major new public sculpture by the celebrated British sculptor, Conrad Shawcross RA, was unveiled at Chelsea Barracks – marking the first artwork to be installed as part of an ambitious programme of public art commissions created for London’s newest neighbourhood.