It's Just Like any other job: Sarah Maple and writer+curator Beverley Knowles Multiple performances TODAY from 6pm - FAD Magazine
Skip to content 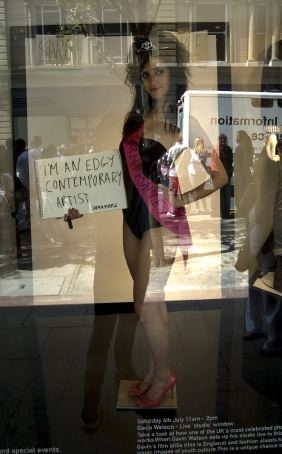 Artist Sarah Maple and writer / curator Beverley Knowles will be taking part in a week-long series of talks and performances at La Scatola Gallery wherein developments and trends in contemporary art will be explored.

On Friday 30 March they will present It’s Just Like Any Other Job Really – Dedicated to World Peace, a collaborative performance influenced by feminist and non-feminist art history, particularly the performative works of artists such as VALIE EXPORT, Carolee Schneeman, Marina Abramovich, Tehching Hsieh and Andrea Fraser. ‘Dedicated to World Peace’ also makes particular reference to Santiago Sierra’s Group of Persons Facing a Wall, a provocative work staged at Tate Modern on 21 April 2008. At last count there where over 35 performers scheduled to perform !

Dedicated to World Peace investigates relationships between women through the metaphor of the annual Miss World competition, which extraordinarily outmoded pageant continues to roll on year after year. It will also highlight the cliches and stereotypes of what is seen to constitute femininity, of what it is to be a woman in 2012.

Influenced by artists such as Jeremy Deller and John Gerrard, Sarah Maple and Beverley Knowles wish to abnegate individual authorship and present the piece as a group collaboration between themselves and the participants in this faux Miss World. Upon entering the gallery the viewer also becomes an inadvertent participant in the competition for world supremacy.

Sarah Maple was born in 1985. In 2007 she completed a BA in Fine Art from Kingston University and went on to win Saatchi’s ‘4 New Sensations’ competition for emerging artists. Since then Sarah’s artwork, films and performances have been exhibited in New York, Canada, Israel and throughout Europe.
sarahmapleart.blogspot.co.uk/

Beverley Knowles is a freelance curator and writer focused on contemporary multi-disciplinary and performance art and the history of feminist art. Beverley has written for The Guardian, The Economist, More Intelligent Life, NY Arts, Twin, This Is Tomorrow, Spoonfed and others. She was the curator of Sarah Maple’s recent solo show It’s A Girl! at Aubin Gallery, London.