For the first time in history, humans now have plastic in their blood which could pose a health risk that may be irreversible. And yet, global production of plastic is set to double by 2030 meaning the planets plastic crisis is set to worsen dramatically unless we all work together to create solutions and change our habits. Le Good Society is a UK-based organisation committed to arts and activism. For the third year, Le
Good is assembling a group of talented artists to raise awareness around plastic pollution and Plastic
Free July – to encourage one and all to reduce their single-use plastic usage.

Plastic pollution is one of the greatest threats facing our planet. It is in the air we breathe, the food we eat, the water we drink, and the clothes we wear — killing wildlife and polluting the oceans. We all need to understand this and take whatever actions we can to help.’

Titled “Let’s Live With Less Plastic,” the outdoor art exhibition presents work from standout artists including Anthony Burrill, Sarah Maple, Shingai, and Dave Pollot that will feature on billboards not only in the UK but also in the Netherlands, Denmark, and New York City’s Times Square.

The art is unexpected, catches your eye, and is a powerful way to communicate a message so critical
to life on earth.

Paul Davis has created a series of illustrations depicting plastic particulates coursing through parts of our bodies including the lungs, circulatory system, brain and even our sexual organs. Posing the question of what it will mean when micro plastics cross the blood-brain barrier with his illustration of plastic particles circulating the brain – provoking conversations about plastic’s vast unforeseen health consequences, as researchers now grapple with this. Tom Hodgskinson on the other hand paints an apocalyptic beach scene with a handful of people staring into a dried up ocean void of life as it is reported that 32% of the 78 million tonnes of plastic packaging produced annually is left floating in our oceans – equivalent to dumping a rubbish truck filled with plastic into our ocean every minute. While Shingai depicts the polluted world in which we live in and rightly declares how, ‘it is time for a revolution’.

This year’s event also includes a new online 3D virtual exhibition with Hedera Gallery built on the Hedera network, beach cleans and an online art auction with the digital versions of the art utilising distributed ledgers to raise vital funds for plastic pollution and ocean conservation through the charity partner, Oceanic Global. Donations support Oceanic Globals work to protect and restore the health of our blue planet and all it sustains. Oceanic Global’s work has removed 993,746,227 single-use plastics from entering the ocean long-term. Every £1 raised will help prevent 1KG of plastic from entering the ocean. Additionally, individuals and companies will have access to an easy to use online resource at the end of July via www.legoodsociety.com, where they can directly counteract their own plastic consumption by offsetting their plastic usage for the month of Plastic Free July and every month to come.

From day one, Hedera has had a keen environmental mindset, and recognises not only the importance
of being a carbon-negative network, but also of the key role that technology can play in creating
awareness and solving the issues we face around environmental pollution of all kinds.

“Artists globally are minting their NFTs on the Hedera network and exploring other ways to leverage distributed technology to ensure that their art aligns with their ESG values, and leaves the world a better place than they found it.”

The outdoor art exhibition runs until 31st July Access both the virtual exhibition and online auction via legoodsociety.com 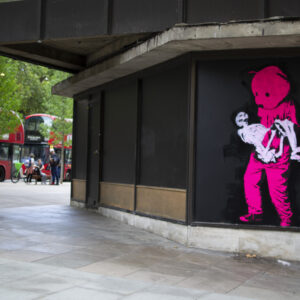 MEET THE ARTIST INSIDE THE PINK BEAR

The Pink Bear is a signature of LUAP’s work. It has appeared in street art murals in London, on a […]