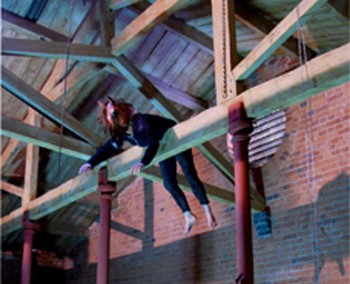 Sculptural supports and stands will be installed in the space supporting the weight of performers as they manipulate themselves into various forms in the gallery. Debris from past exhibitions, scaffold planks and other structures will be used as a type of staging or sculptural assemblage within the tight confines between wall and window; Performers using this structure to explore every aspect of the gallery.

The space will be active everyday from 6am to midnight for seven days. The selection of poses will change daily as well as the terrain of the gallery. Visitors can experience the piece by either visiting the space or viewing it online via a live web linkup. Hoping to create a immediacy and intimacy with the viewer but also question the various modes of presentation. Having the live feed demonstrates the external and internal contrast with the gallery space and encourages viewers to ask what it is they are experiencing. The feed will feature heavy breathing and grunts as the performers struggle through their poses, which you would not hear when viewing it directly through the glass.

“I am interested in the interface between performance and object, I wonder how far you can perform and object before you become one. This is a great opportunity to use some of these ideas and focus on the presentation of the body, as Vitrine’s space is all about observing and being observed.” Leah Capaldi.

Capaldi (b. UK, 1985) graduated from Royal College of Art in 2010. In 2011, she was selected and exhibited in Bloomberg New Contemporaries, ICA (London) and SITE Gallery (Sheffield). Other recent exhibitions include EXPOSURE 2010, Parasol Unit, London and Testing Ground: Live, 176 Zabludowicz, London.

‘Prop’ is the first in the VITRINE LIVE season, which will also include works by Edwin Burdis, David Paredes and Eddie Peake. Four artists over eight weeks will each produce a new live installation work within Vitrine Gallery‚ is a unique exhibition space (a 16 meter wide window on the public square, visible 24-hours). Each work will be an individual piece, happening consecutively. The season will be used to encourage a dialogue between works. 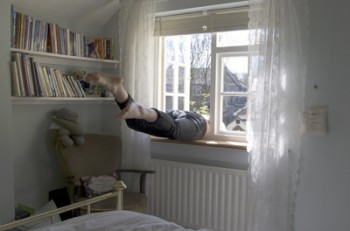 For the first time, performance will activate the main gallery, imbedded in a complex framework of images within this unusual exhibition space. Artists are invited to explore the crossovers in their practice between live art and the visual field. Subverting the premise of performance within its traditions as an ephemeral medium, the gallery will become an integral part of the work as an environment, backdrop or prop to the performance. Meanwhile, the square itself becomes an arena for display. Curated by Alys Williams.

For more information and to check out where to watch the live feed. Please visit: http://www.vitrinegallery.co.uk/