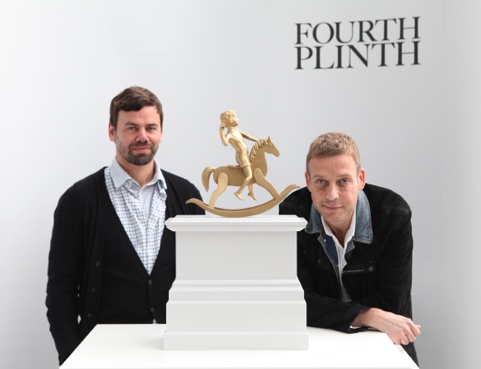 British actress Joanna Lumley will unveil the new Fourth Plinth Commission in Trafalgar Square by Elmgreen & Dragset, on Thursday 23rd February at 9.30am.

Commissioned by the Mayor of London and supported by Arts Council England, AlixPartners and Louis Vuitton, the 4.1m high golden bronze sculpture portrays a boy astride his rocking horse.

The child is elevated to the status of a historical hero in line with the existing iconography of the other statues in the square. Instead of acknowledging the heroism of the powerful, however, the work celebrates the heroism of growing up. In Powerless Structures, Fig. 101 there is not yet a history to commemorate – only a future to hope for.

Joanna Lumley and Elmgreen & Dragset first met in 2008 when collaborating on Drama Queens, a theatre production conceived by the artist duo. Lumley provided the voice for one of six famous sculptures who acted as protagonists in the production, performing to a seated audience. The format of the play reversed the typical roles of how the audience engages with art in galleries, as well as traditional concepts of theatre.

Elmgreen & Dragset said, “Joanna Lumley is such a fantastic and charismatic person that we couldn’t have a better ambassador at the unveiling.”

Artists Biography
Michael Elmgreen and Ingar Dragset, based in Berlin and London, have worked together as an artist duo since 1995. They have held numerous solo exhibitions in art institutions worldwide, including Serpentine Gallery and Tate Modern in London, Museum Boijmans van Beuningen in Rotterdam, ZKM Museum of Modern Art in Karlsruhe, The Power Plant in Toronto, MUSAC in Léon, and Kunsthalle Zürich. Their work has been included in the Berlin, Sao Paulo, Gwangju, Moscow, Singapore and Istanbul biennials, and in 2009 they received a special mention for their exhibition “The Collectors” in The Nordic and Danish Pavilions at the 53rd Venice Biennale. Amongst their most well known works are “Prada Marfa” – a full scale replica of a Prada boutique in the middle of the Texan desert, and “Short Cut” – a car and a caravan breaking through the ground which was first shown in Milan and now resides in the collection of the Museum of Contemporary Art, Chicago. A major exhibition is planned at the Victoria and Albert Museum for Autumn 2013.
wikipedia.org/wiki/Elmgreen_and_Dragset

The Fourth Plinth Programme
The Fourth Plinth Programme is the most provocative contemporary art prize in the UK. Funded by the Mayor of London with support from Arts Council England the programme invites world class artists to make astonishing new works for the centre of the Capital City. The programme was initiated in 1998 by the RSA with the support of the Cass Sculpture Foundation. In 1999 responsibility for Trafalgar Square was transferred to the Mayor of London and the Greater London Authority.

The Fourth Plinth Programme is led by the Mayor’s Culture Team, under the guidance of the Fourth Plinth Commissioning Group (FPCG). The FPCG recommends contemporary works for the Fourth Plinth. The first commission under the FPCG was Marc Quinn’s sculpture Alison Lapper Pregnant, unveiled in a public ceremony in September 2005. It was followed by Thomas Schütte’s Model for a Hotel in 2007 and by Antony Gormley’s One & Other in 2009. Yinka Shonibare MBE’s sculpture Nelson’s Ship in a Bottle remained on the plinth until the end of January 2012. In November 2011 The Art Fund and the National Maritime Museum launched a public appeal to give the commission a permanent home at the National Maritime Museum in Greenwich. Katharina Fritsch’s commission Hahn / Cock, will follow that by Elmgreen & Dragset and will be unveiled in 2013. Previous commissions have been Ecce Homo by Mark Wallinger (1999), Regardless of History by Bill Woodrow (2000) and Monument by Rachel Whiteread (2001). Arts Council England has been a funding partner supporting the programme since 2003.

Arts Council England champions, develops and invests in artistic and cultural experiences that enrich people’s lives. We support a range of activities across the arts, museums and libraries – from theatre to digital art, reading to dance, music to literature, and crafts to collections. Great art and culture inspires us, brings us together and teaches us about ourselves and the world around us. In short, it makes life better. Between 2011 and 2015, we will invest £1.4 billion of public money from government and an estimated £0.85 billion from the National Lottery to help create these experiences for as many people as possible across the country.
www.artscouncil.org.uk

In situations needing urgent attention or solutions which deliver a high-impact, AlixPartners small teams of senior professionals improve business performance, execute turnarounds, provide dispute services, carry out corporate investigations and offer world-class interim management. Working in over 50 languages, AlixPartners supports organisations in Britain and around the world in quickly improving operational and financial performance with sustainable results. When people call AlixPartners to work with them, it is because they want to make a game-changing difference, not just something incremental.
www.alixpartners.com/

Founded in Paris in 1854, Louis Vuitton is synonymous with the art of travel. Its iconic trunks, luggage, and bags have accompanied journeys throughout time. With the arrival of Artistic Director Marc Jacobs in 1997, Louis Vuitton extended its expertise to ready-to-wear, shoes, accessories, watches and jewellery, available in its exclusive network of stores located all over the world. www.louisvuitton.com