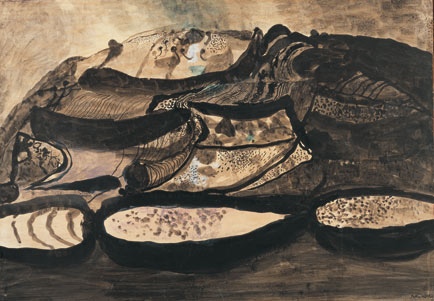 Graham Sutherland (1903-80) is everywhere and nowhere. His charred and thorny landscapes are held in quantity by museums all over Britain. His gargantuan tapestry of Christ dominates the entire space of Coventry Cathedral. His portraits – and portraits of him, once so pre-eminent – stud the National Portrait Gallery, and everyone knows the old chestnut about Lady Churchill quietly destroying Sutherland’s portrait of Winston, who thought it made him look thick. But the artist himself is rarely a name on people’s lips. Sutherland is not so much lost as forgotten.

Or so it seemed until Dulwich Picture Gallery’s show six years ago, which rightly edged Sutherland nearer to English neo-romanticism and away from Euro-modernism. And now the painter George Shaw has done something equally valuable. Quite apart from linking his own name with that of Sutherland, and thus perhaps attracting a new young audience lured by Shaw’s lovingly miserabilist suburban scenes, which made him the popular choice for this year’s Turner prize, if not the judges’, Shaw has selected – and written beautifully about – 80 small-scale Sutherlands for Modern Art Oxford. They show the painter at his strongest and strangest.

This strangeness is crucial to the show’s impact; for familiarity was, at least in part, what did him in. Sutherland’s look was fixed early on and never seemed to change very much. It was instantly recognisable. Spikes, holes, roots and barbed-wire whorls, twisty roads, trees like organ pipes, thorns like aluminium lances: there was a definite language and a distinctive composition. Organic forms, twisting and tortured, were generally centred against panels of shrill or glowing colour.

That may well bring Sutherland’s friend Francis Bacon to mind, and sure enough the argument still blows up about who influenced whom, each side offering conflicting evidence. But Bacon’s powers exceed those of Sutherland by some way, and not just because his organic forms are human. In the large oil paintings, Sutherland seems to be always aiming for a darkness of vision he never quite reaches.

But in Oxford all the works are on paper and most were made outdoors in the landscape, its exhilarating force all around him. Sometimes it is Surrey, where he was brought up, or Kent where he later lived. But mainly it is the landscape of Wales, above all Pembrokeshire.

The first work here tilts the landscape until it’s almost vertical. Sutherland paints the hills from high above and yet somehow deep within, as a kind of externalised geology. As early as 1934 he is using washes of bitter orange and yellow on grey paper, pinning the dark and knotted forms together with that scintillating black line of his that makes watercolour look like ink.

The scenes look ominous, even before war breaks out. In Welsh Landscape with Yellow Lane the sun’s rays strike from behind a black cloud like searchlights and the lane is a torrent of burning liquid. Harvest stooks bristle like Sputniks in the cornfields beneath suns spiky as Liberty’s diadem.

The landscape is never soft or rounded. It is ominous and fearful, dying as it gives birth in black and gold. Sutherland spoke of his first experiences of Pembrokeshire as momentous: “the exultant strangeness of the twisted gorse on the cliff edge, the flowers and damp hollows… the emotional feeling of being on the brink of some drama”.

And that pitch is there even in a little painting such as Tree Forms, where the eponymous trees are striding forwards with their pale arms outstretched. Or in Dwarf Oaks, where a cavity in a tree trunk looks like some nightmarish chute into the underworld, glowing black and red like Henry Moore’s underground in the blitz.

Moore, Nash, Bacon: Sutherland was as often compared with his British contemporaries as with the figures of international modernism. And nobody walking round this show could fail to see resonances everywhere, with Picasso, with Masson and the surrealists, but also with artists of the future including Philip Guston and Paul Noble.

The odd thing is that when the war Sutherland seems to have been waiting for finally arrives, modernism becomes redundant. In his Devastation series, the shards and planes of cubism have become one with the shattered houses, ripped buildings and collapsed mineshafts. Barbed wire is literally barbed wire. Idiom cedes to reality.

There are no people, only ruined streets by night or felled girders that stand white and bare as the ribs of a whale. When the paper factory burns down, the charred bales revert to petrified trunks. Sutherland’s vision of Britain is practically primordial, darkness out of (and returning to) darkness.

Sutherland trained as an engineer before studying at Goldsmiths. He has a strong sense of forms fitting together, moving and grinding, quite literally in the many open quarries and tin mines in this show. Underlying structure is his technical forte. But from first to last there is also this dark, internalised excitement.

It is there in the three Studies of a Mountain, in which the mountain swells to bursting point with blood-coloured emissions. It is there in the mines that open like raging infernos and the heaps of stones that seem to hold the contours of human faces. But most of all it is there in Pembrokeshire and what lies beneath its surface.

In his catalogue essay, and the eloquent film screening at Modern Art Oxford, Shaw draws a comparison between Sutherland and Samuel Palmer. This feels right. Both artists depict a small part of the world, greatly loved and minutely studied. Both excel as graphic artists. What Sutherland finds in the landscape is quite different, of course, from Palmer’s joy in every cowslip, but it is still a form of captivation. Even after decades of comfortable exile outside Nice, Sutherland still preferred Wales, returning to those dark hills and dying suns at the end as if he had never been away.