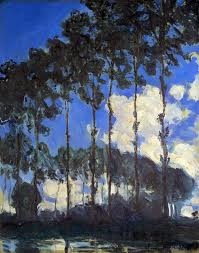 Claude Monet Poplars on the Epte 1891
Tate Oil on canvas

Some of the most beautiful and beloved paintings of the early 20th century, Claude Monet’s shimmering Water Lilies, will come together in Liverpool next year – the first time two of the pictures have ever been seen in the UK and the largest assembly of the works in the UK in more than a decade.

Tate Liverpool is borrowing The Water-Lily Pond, begun in the last years of the first world war, from the Albertina in Vienna and the slightly earlier Water Lilies from the Fondation Beyeler in Basel. Neither has been exhibited in the UK before. They will hang with Water Lilies 1907, borrowed from the Göteborgs Konstmuseum in Sweden, Water Lilies 1916 from the Metropolitan Museum of Art in New York and another from 1916 on long-term loan from the National Gallery.

Monet created the large pond in his garden at Giverny specially to plant it with the water lilies so he could paint them in all lights and seasons. Some have also seen the decline of his eyesight, and its improvement after surgery, in the paintings’ shifting perspectives and colours.

Most of Monet’s second great series of water lily paintings was created in the years when his only surviving son, Michel, was at the front in the first world war, so close that Monet could hear the guns from his studio.

The Monets will be seen alongside late works by JMW Turner and Cy Twombly, the American painter who died in July, in an exhibition opening in June. It will examine the response to mortality and grief, both personal and global, of three artistic giants spanning more than two centuries.

Jeremy Lewison, curator of the exhibition, said: “The water lily paintings mark the crowning moment of Monet’s career and are among the most recognised of his paintings. To have five major examples in an exhibition is incredibly rare. Painted against the backdrop of the first world war, they represent an oasis of calm while all hell was breaking loose around him. For Monet these paintings assuaged his sense of personal grief. Mourning and loss are key themes in this exhibition for all three artists.”

Tate Liverpool also announced that its new artistic director would be Francesco Manacorda, director of Artissima, the international contemporary art fair based in Turin. Manacorda, also a writer and critic, previously worked as a curator at the Barbican in London. He will take over in Liverpool in April, succeeding Christoph Grunenberg, who chaired the Turner prize jury in 2007 on the first occasion it was held outside London, and co-curated the record-breaking Gustav Klimt exhibition in 2008. He has returned to Germany as director of the Kunsthalle Bremen.

Manacorda said: “Tate Liverpool has an amazing history combining cutting-edge programming with great art historical scholarship. I am delighted to have the opportunity to contribute to the mission of such a leading international museum.”