The World is Still Big at Victoria Miro is the culmination of Alex Hartley’s on-going investigations into dystopian architecture, secular habitation and the construction of sanctuary, returning to earlier enquiries into community, belonging and isolation, all as core tenets of a drive to discover refuge from the world.

Alex Hartley’s world is counter culture, placed in opposition to the establishment, and, in this exhibition undergoes a decisive shift, focussing these enquiries alongside complex and contradictory attitudes towards the built environment. What’s on show is no longer about his is no longer about an ideal, but rather realisations which strive towards means of occupying uninhabited environments, buildings which exist within landscapes and wilderness. 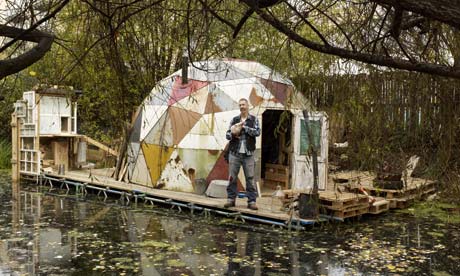 Alex Hartley at his installation at the Victoria Miro gallery in London last week: ‘a lunar module as designed by Harold Steptoe’.
Photograph: Suki Dhanda for the Observer

Across the ornamental pond at the back of the gallery, Hartley has constructed a ramshackle dome that will be his home during the exhibition. Referencing the mid-1960s experimental artists’ community, and first rural hippie commune, Drop City, the iconic Colorado community that an early adopter of geodesic dome architecture, constructions that came to be synonymous with the aspirations of a group of radical artists and filmmakers to create a live-in work of art. 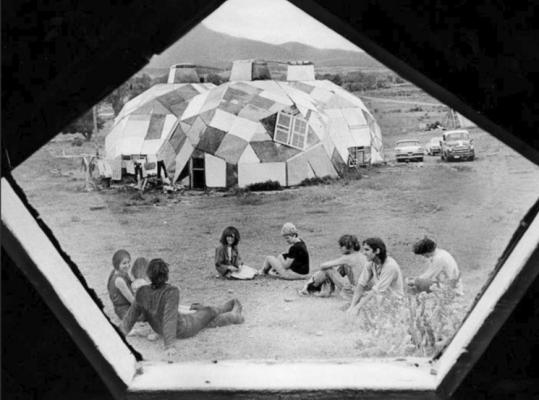 What resulted was the most famous countercultural experiment in communal living of the decade. Yet, for all its forward-thinking aspirations, Drop City was disbanded less than ten years later. Drop City has come to symbolise counter living rather than a Utopian ideal, an alternative way of engaging with the world, and was an attempt at perfect integration of the built and natural environment.? ?In a confusion of place and context, on the garden terrace of Victoria Miro Gallery, Hartley’s own Drop City dome is rusted, aged and out of time, and an eloquent expression of the themes that meet within the works displayed in the gallery, a tension between habitat, seclusion and community. 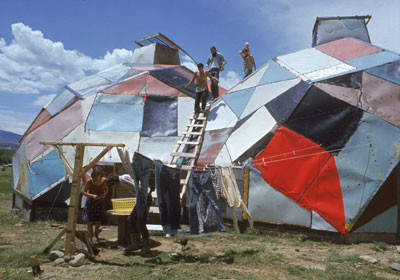 The main gallery displays nineteen new photographs made unique through the addition of intricately detailed sculptural interventions of scaled architectural models built directly into the surface of the prints. These painstakingly built structures and their photographic ground, present narratives alluding to the creation of something which has turned against us and become uninhabitable, rather than as intended sanctuary from the outside world.   ??These works are accompanied upstairs by a sculpture of a life sized one-man tent, half buried within a snowdrift. It is unclear as to whether the solitary occupant has survived the storm. The project space will feature artefacts and objects from Alex Hartley’s 2004 and 2011 expeditions to the High Arctic. These tell the story of the newly revealed island discovered by the artist and its declaration and transformation into the new nation: Nowhereisland. Included will be the weathered remains of the claim left during Hartley’s first encounter and photographs documenting the fragility and changing nature of the island. Three maps will hang together detailing the accumulating number of Nowherian citizens, at present over 3000. Nowhereisland represents a significant expansion of Hartley’s artistic practice into the public realm In 2012, Nowhereisland will embark upon its 500-mile journey around the south west coast of England as part of the Cultural Olympiad. One landscape moving through another. Produced by the commissioning programme, Situations, Nowhereisland also involves a year-long online programme of Resident Thinkers at www.nowhereisland.org