Let Me Feel Your Finger First is an artists animator collection, who go against the grain by rejecting conventional character animation, with works that utterly revel in it, embracing it, dissecting it, playing with it. These three new LMFYFF characters each have their roots in animation, a move which sees them transformed from children’s cartoon, character-based scenario, frame-by-frame construction to complex characters that call forth fascinating questions and existential dilemmas in a playful and charming way.

The realisation is a wonderfully provocative, playful and intriguing host of characters, who arouse fascination, at the show you’ll meet a cooking pot whose Jack-in-the-Box inhabitants allude to animation’s ignoble history of racial stereotyping, a character whose existential anxiety compels him to disguise himself as a rock from an Asterix comic background and a pair of puppets who satirise pretentious, art-world careerists.

Ontologically Anxious Organism is nervous about the notion of character. He feels the other members of his comic family trying to rise up inside him and use him as an exit. So he disguised himself as a boulder (the type of boulder one might overlook in some Asterix comic). In Episode Two of the animated series, Ontologically Anxious Organism grapples with existence as he meets his maker.

In the 1930s a popular genre of animated film emerged in the United States – the cannibal cartoon – in which the anthropomorphised white ‘hero’, marooned on an island, was captured by a tribe of savage black cannibals and thrown into the cooking pot. LMFYFF’s provocative new character Post-Colonial Cannibal is a Frankenstein creation, reconfigured from the vestiges of this half-forgotten, problematical imagery. A character that remixes the conventional cartoon ‘savage’ and takes aim at animation’s ignoble history of racial stereotyping. Anthropophagy and anthropomorphism: constructing ‘Post-Colonial Cannibal’ an article by LMFYFF on the development of the character was recently published in the inaugural edition of Animation Practice, Process and Production (Ed. Paul Wells) LMFYFF recently gave a lecture performance on the Post-Colonial Cannibal project at the acclaimed independent music and arts festival Supernormal, held in Braziers Park, Oxfordshire each August. 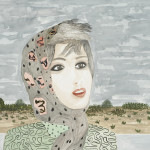 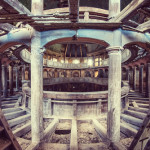