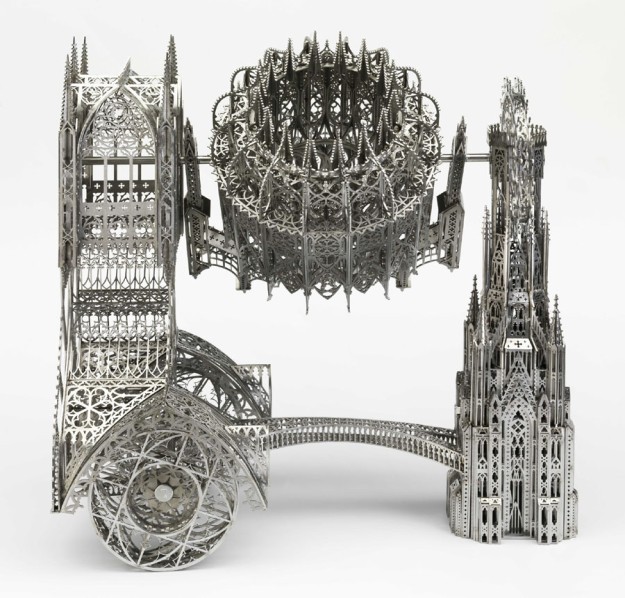 WIM DELVOYE is a multi-disciplinary artist whose huge body of work ranges from intricate steel sculptures to tattooed pig-skins, from the infamous Cloaca digestive machine to bronze figures with religious motifs.

What brings the practice together is the artist’s insistence on conceptual rigour and intellectual challenge, as well as a characteristic dark humour pervading most of his creations.

The absurd and the witty delight as much as shock in a practice which is as much about impossibilities of form and function as about asserting a complete and unhampered artistic freedom. 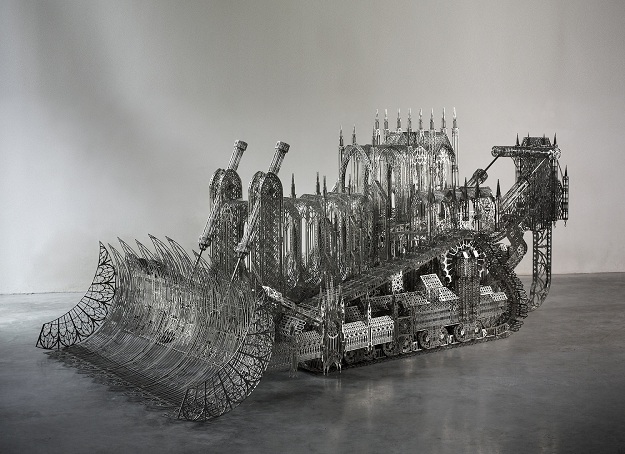 ROBILANT + VOENA will show several recent ?Gothic? works, including a scale model Bulldozer measuring an impressive 275 x 150 x 160 cm. Crafted using lazer cut stainless steel following computer generated designs, the sculpture is welded together making an elaborate mass of ornamentation. The utilitarian form is obfuscated by the incongruous patterns drawn from neo-gothic cathedral architecture, and vice versa ? the clash of form and function thus achieving an unsettling aesthetic which is the artist?s signature. Elsewhere, a three meter tall Jesus and other works from Delvoye?s Twisted Bronze series continue the artist?s referencing and reinterpretation of catholic imagery, incorporating what he himself terms as ?deviant elements?. Celebrating paradox, Delvoye builds on the Belgian surealist tradition in combining conflicting elements within a single work of art, whilst questioning what is sacred and what is banal.

Born in Belgium in 1965, Delvoye currently lives and works in Ghent, Belgium. Having exhibited widely on the international stage, this will be WIM DELVOYE?s first major London exhibition, and therefore a unique opportunity to view first-hand this important artist?s work. There will be a Reception for the Artist on Tuesday 11 October, which will also present an opportunity to view the concurent gallery exhibition ?GIORGIO MORENDI : Still Life?.