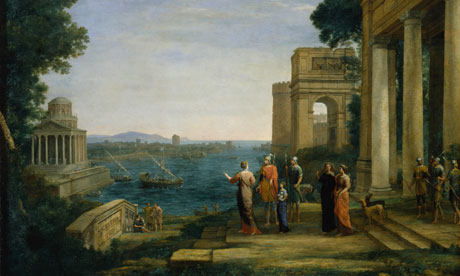 This article titled “Frieze, Warhol, Hirst – the week in art (and money)” was written by Jonathan Jones, for theguardian.com on Friday 7th October 2011 08.00 UTC

Claude
The spontaneous drawings of this French artist in 17th-century Italy offer a radically new persecutive on how he imagined his dreamlike paintings of myth, history, and landscape.
• At Ashmolean Museum, Oxford, until 8 January 2012

Tacita Dean
The most intelligent and serious British artist of her generation takes on the most theatrical and renowned venue of our times. There have been some wonderful and some ordinary installations in the Tate Turbine Hall but here is one that promises, at last, profundity.
• At Turbine Hall, Tate Modern, London SE1 from 11 October until 11 March 2012

Frieze Art Fair
Aha ho, ooh, what to say. Art, money, crowds, hype, VIPs, MPs, squirrels drifting in from the park, that actor from whatsitcalled … you will see them all here this weekend. It is even mentioned in Michel Houellebecq’s latest novel. It is … what it is.
• At Regent’s Park, London NW1, from 13-16 October

Structure and Absence/Inside the White Cube
Fantastically huge commercial art space opens to coincide with aforementioned art fair. Should be worth a gander.
• At White Cube Bermondsey, London SE1, from 12 October until 26 November

Jamie Shovlin
This contemporary artist has put enigmatic works throughout the galleries of Tullie House in Carlisle, a fine museum close to Hadrian’s Wall with one of the best Roman collections in the country.
• At Tullie House Museum, Carlisle, until 27 November

Up close: art and money

Auguste Renoir, Portrait of Ambroise Vollard, 1908
This is an affectionate portrait of a great art dealer who helped at the birth of modern art. Vollard sold Renoir’s works, but he also represented Picasso. He was a creative figure who commissioned ambitious works, and his name will be remembered forever in the title of Picasso’s graphic masterpiece The Vollard Suite.
• At Courtauld Gallery, London WC2

William Hogarth, Marriage A-la-Mode, c1743
Long before art and money celebrated their marriage at Frieze, this great 18th-century satirist painted six jaw-dropping canvases that tell a tale of a dangerous liaison. In Hogarth’s high society London, paintings are luxury items in posh drawing rooms, yet all the purchased culture in the world can’t stop the rot of impotence, adultery, murder and syphilis.
• At National Gallery, London WC2

Andy Warhol, Dollar Sign, 1982
Warhol said the dollar was a beautiful currency. He drew it, screenprinted it, and here wonders at the power of the dollar sign in the 1980s, when greed was good.
• At De La Warr Pavilion, Bexhill-on-Sea until 26 February 2012

Damien Hirst, Controlled Substances Key Painting (4a), 1994
Warhol and Jeff Koons seemed to have said it all about art and money. But with works like this dot painting, Hirst made them look like cultural conservatives gingerly dipping their toes in the hot water of commerce. He has dived right in, auctioning his own works, mocking the art dealers who thought they owned him, becoming so rich it isn’t business art any more, it’s the art of business.
• At Leeds Art Gallery until 30 October

Parmigianino, Portrait of a Collector, c1523
The wealthy bankers and mercenary princes of Renaissance Italy invented the luxury art market as they delighted in antiquities and bold contemporary works. Parmigianino here portrays the kind of connoisseur who funded his own career as a daring mannerist who broke the rules of art and rebelled against classical proportion.
• At National Gallery, London WC2

That Lucy Liu has been dumpster diving, and creating abstract art, for as long as she can remember

Why Manchester cathedral’s been taken over by a giant plughole

How King Robbo launched a Banksy war in Bristol

How much skinheads, mods and rockers have moved on

@rachelguthrie8: “Has Degas become so much of a mainstream mover that all that was innovative about him has been streamlined? #artweekly”

Have you seen any of these shows? What have you enjoyed this week? Give your review in the comments below or tweet us your verdict using #artweekly and we’ll publish the best ones.