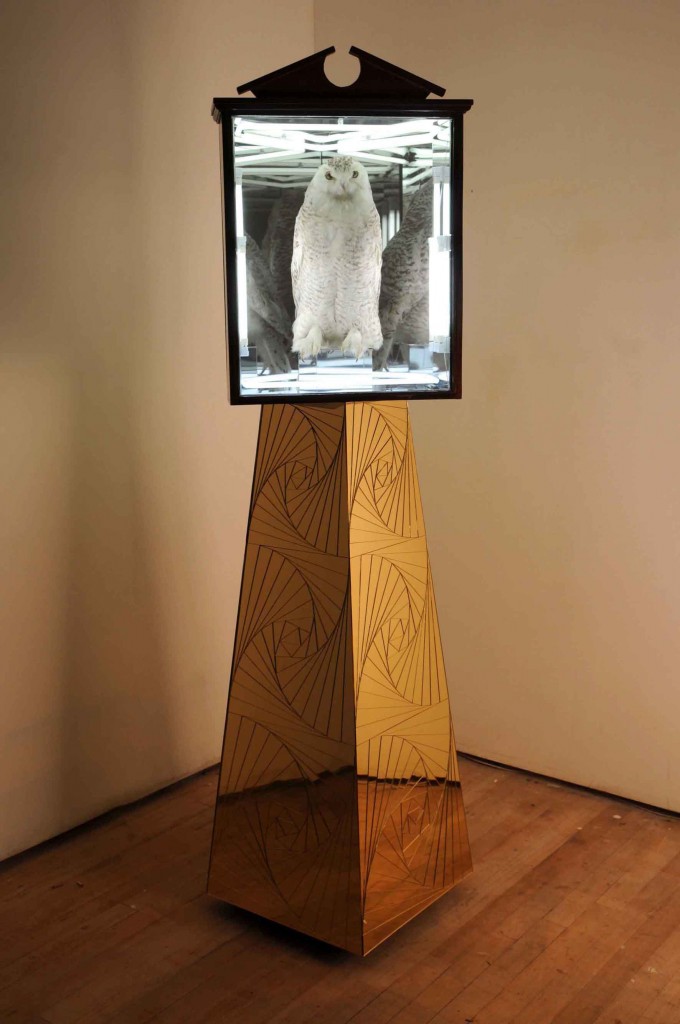 New paintings, pyrographics and sculpture.
Gordon Cheung’s artistic vision is fuelled by an anxious reflection on the current state of affairs in capitalist societies. In response to the hegemony of neo-liberal ideology and the spiralling internal logic of the markets, he invokes prophetic visions of the impending end of our civilization: epic, sublime but terrifying revelations of post-apocalyptic landscapes, set against the backdrop of stock prices. He cross-references cultural, mythological, political, religious and artistic allusions to capture the ‘desert of the real’: a hyper-real cyberscape of toxic undertones and noxious glows, complete with rampaging fauna, paranoiac hallucinations of collapsing architecture and techno-psychedelic Biblical apparitions.

Cheung begins a painting by laying out a background of collaged sheets from the Financial Times. Over this base, he juxtaposes layers of digital printing, ink, oil and acrylic paint. Despite an apparently phantasmagoric universe, Cheung’s practice is undeniably rooted in the real: his iconography is not imagined, but lifted from user-generated content on the internet; and current affairs, in particular news items surrounding the credit crisis, the ‘war on terror’ and environmental disasters provide much of the raw material for his work. Although the small print of stock market listings is at times barely visible, covered as it is by the heavy impasto that characterises recent paintings, the market is omnipresent in the work – an ambiguous agent offering the irresistible prospect of unimaginable wealth, while permanently threatening the universe with unequivocal destruction. But the notion of ‘financial capitalism” does not interest Cheung as much as that of “virtual capitalism”, of speculative financial transactions disconnected from the sphere of material production and physical reality. In this, he is in line with the philosophy of Gilles Deleuze and Jean Baudrillard, who both anticipated the de-materialisation of ‘real life’ and its reversal into a spectacle. The fantasy of undoing and exposing the spectacle (or the simulacrum) is also a recurring theme in Philip K. Dick’s literature. His novel ‘Do androids dream of electric sheep’ was adapted for the cinema in 1982 by Ridley Scott in the sci-fi cult movie Blade Runner, a major source of inspiration for Cheung in the making of ‘The Light that Burns Twice as Bright’.

Set in 2019, Blade Runner envisions a world where androids (replicants) have become so akin to humans that only professional expert-hunters (blade runners) can tell them apart, by appraising their capacity for empathy. The film follows one of the finest blade runners, Deckard (pronounced “Descartes”), on a mission to identify and destroy a faction of mutinous replicants. Blade Runner and The Light that Burns Twice as Bright have much in common. The latter is a quote from the former, and also a reference to a Chinese proverb (“The light that burns twice as bright burns for half as long – and you have burned so very, very brightly” says Dr. Tyrell, the genius creator, to one of his dying replicants after failing to prolong his lifespan). Scott’s film and Cheung’s exhibition also come together in the Ballardian predicament of a utopian impulse framed by a dystopian urban landscape. Most importantly, they share a preoccupation with defining human identity in the context of post-modern, technologically advanced societies, as well as how technology changes the relationship between people and nature, and brings us back to the question that Descartes’ Cogito presumably answered: what does it mean to be human?

There are many ways to define human nature (it can be cultural, biological, ontological, political etc…), but it is the ethical dimension that Cheung’s recent pyrographic laser etchings put under close scrutiny. Light’em All Up and The Disasters of Terror are based on two recent episodes of the ‘war on terror’, in which the (mis-)handling of human life brings into question our fundamental ideals of human dignity, morals and freedom and illustrates the supremacy of power over life as intrinsic to the Western conception of sovereignty.

Since the Age of Discovery and through to the present day, the West has guaranteed its relative prosperity by inflicting brutality and destruction on the rest of the world, ideologically considered as barbarian. For Cheung, this sombre history of nefarious wars and conquests is a barometer of the level of civilization and humanity in our society. The fate of the victims in Light’em All Up and The Disasters of Terror resonates with Italian philosopher Giorgio Agamben’s idea of Homo Sacer (in Homo Sacer: Sovereign Power and Bare Life, 1998): someone who is biologically alive but deprived of human rights (Blade Runner’s replicants are also Homo Sacri). In ancient Roman law, Homo Sacri could be killed with impunity and their death had no expiatory currency. The sacrificial rhetoric which underlies the concept of Homo Sacer and the magniloquence around the ‘war on terror’ naturally lends itself to the Biblical symbolism of Cheung’s artistic production. It also finds a powerful vehicle in the 19th Century Romantic aesthetic of the Sublime, an artistic vocabulary from which Cheung’s taste for catastrophe and allegorical landscapes is largely derived, and of which the experience of ‘terror’ was also an essential element. 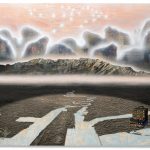 Gordon Cheung’s new solo show, Tears of Paradise is the latest in a series in which Cheung witnesses and interprets the emergence of China as a twenty-first century global superpower. 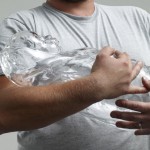