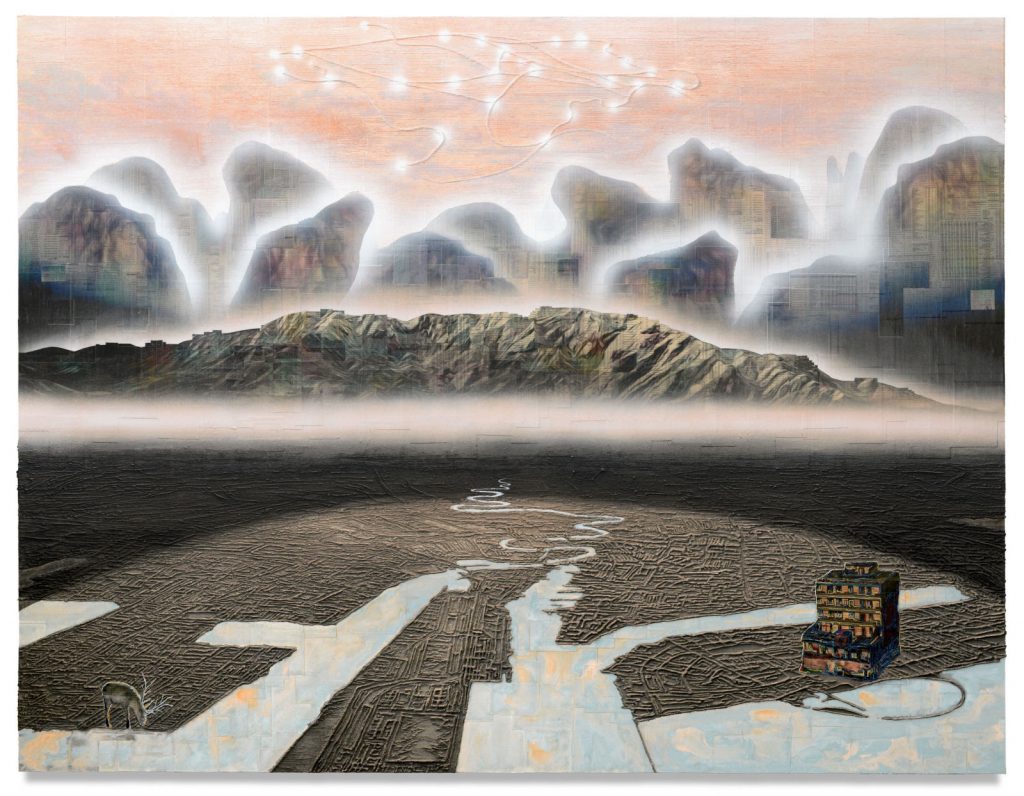 Gordon Cheung’s fourth solo show with Edel Assanti, Tears of Paradise is the latest in a series in which Cheung witnesses and interprets the emergence of China as a twenty-first century global superpower, framing current events in the context of the “Century of Humiliation” and the opium wars.

Five paintings in Tears of Paradise depict aerial perspectives of real and part prophetic landscapes, each relating to specific sites in China that collectively comprise the largest infrastructural project in human history. The sprawling cityscapes are rendered from satellite imagery, built up as reliefs on the canvas in hardened sand and pigment.

The works map the administration’s planned consolidation of some of the world’s largest cities into several inconceivably large megalopolises. In one work, the cities of Beijing, Tianjin and Hebei float like drifting islands, inviting contemplation of the future city of “Jing-Jin-Ji” – with a population of 100 million residents in an area larger than Britain. These sites are depicted in a state of flux – pieces in a monumental puzzle of centralised state planning designed to bolster and sustain the Chinese economic miracle.

Cheung’s paintings blend real and foreseen events to articulate the speed and complexity of change, constantly weighing human costs. Suspended in the middle of the gallery is a monumental sculptural installation, entitled Home. Made from financial newspaper and bamboo, Cheung’s window installation refers to homes in China with traditional window designs that were demolished for rapid urbanisation. The sculpture hovers between states of being, suggesting a ghost architecture that would have supported the windows. The visitor is pulled back down to ground level from the god-like, macro perspective of the paintings. The windows act as a demarcation between the march of unstoppable progress, and the framework of identity, history and culture that define the individual; in Tears of Paradise, we are left pondering the greatest paradigm shift the world has ever seen from each point of view. 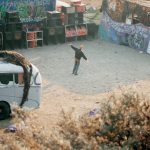 At the fringes of Mayfair, a striking pair of artists have built twinned monuments to the power of disruption and […] 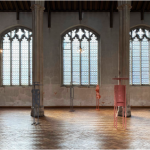 Alongside Edel Assanti’s presentation of Oren Pinhassi’s work as part of Frieze Viewing Room, they are presenting an off-site exhibition of ten new sculptures by Pinhassi at St Cyprian’s church over the course of Frieze week closing this Saturday 10th October.