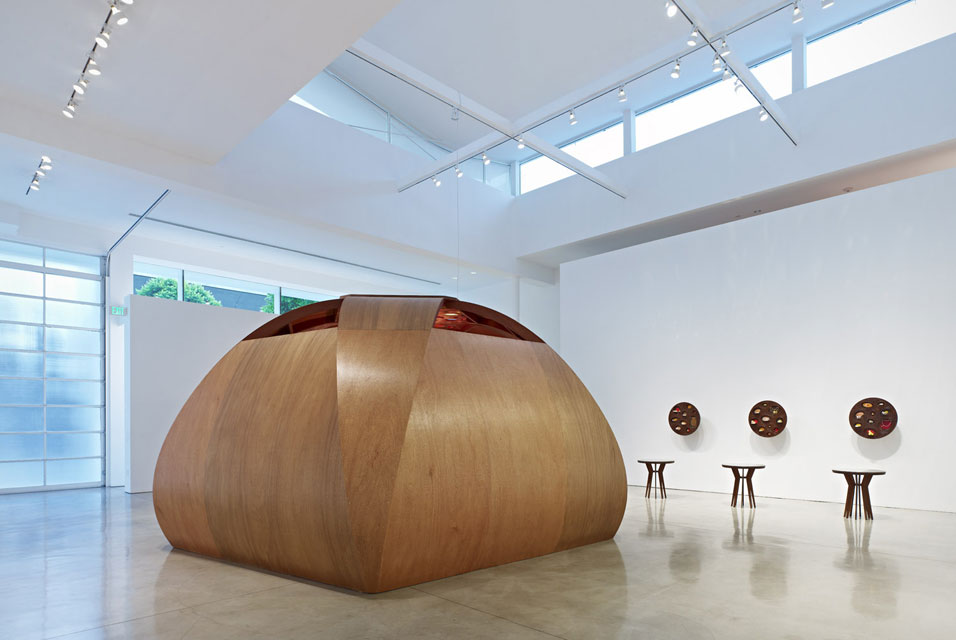 Pardo merges art, design, and architecture, drawing on the historical intersections of these disciplines from the Bauhaus to Robert Smithson while interrogating the conventional uses of public and private space. His diverse production range from hand-crafted furniture evoking Modernist designers such as Alvar Aalto and Charles Eames to large-scale, site-specific projects such as the house he designed in 1998 for an exhibition at the Museum of Contemporary Art, Los Angeles and subsequently moved into. In his designs for both the Mountain Bar in Los Angeles and the lobby and bookshop of the former Dia Foundation for the Arts in New York, Pardo re-imagined public spaces as vivid aesthetic environments. Although his works are not easily categorized, he considers himself to be a sculptor, transforming traditional gallery spaces into installations that often combine his own designs for rugs, lamps, and furniture with paintings to prompt a reevaluation of their respective functions and significance and thus further dissolve the boundaries between art and life.

Bulgogi is the name given to a traditional Korean dish of marinated, barbequed beef, which Pardo uses here as a metaphor for Korean immigration and cultural assimilation in Los Angeles. Transforming the gallery into a domestic environment, Pardo creates a “drawing room” using a kaleidoscopic patterned rug of his own design and wallpaper based on a photo-collage of local Korean-Americans. The wallpaper includes scrapbook images framed by graphic flower cutouts, an evolution of a previous wallpaper installation that mapped the social history of Los Angeles. A series of vibrantly colored “fan paintings” on canvas, based on computer-generated abstractions evokes the push-pull dynamic of modernist abstraction, while a newly designed jewelry cabinet filled with idiosyncratic bracelets, rings and necklaces made of plastic, wood, gold, pearls and diamonds is an adaptation of Pardo’s own earlier designs in the new context of the unifying cabinet display and gallery space. This gesture is intended to parallel the assimilation and adaptation of the immigrant population over time.

Check out Cy Twombly in Ibiza this summer.