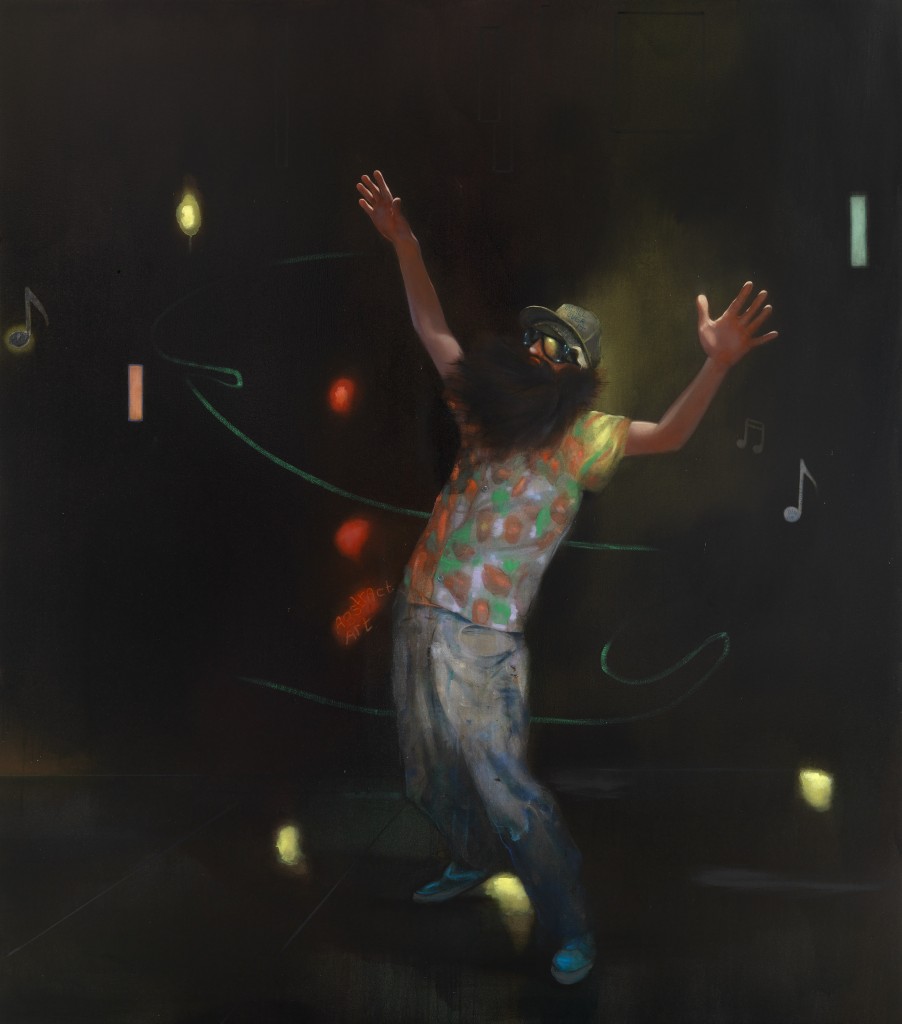 Nigel Cooke’s paintings construct a dark and melancholic world; a deeply psychologised landscape filled with an atmosphere that articulates the trauma of creative dereliction. At its core, Cooke’s work is an allegorical conception of creativity and production, played out in a world populated by artists and philosophers. This is a place haunted by
vagrant and degenerate martyrs who have caved-in to a parody of existentialism and committed themselves to experience over abstractions of thought.

These characters abandon reason, wilfully and foolishly throwing themselves headlong into the unseen and unknown. In this new exhibition Night Crossing, Nigel Cooke’s dramatic centrepiece is the monumental triptych Departure.

Describing a voyage of discovery, Departure is set amidst the artist’s re-reading of Max Beckmann’s triptych of the same title (1933-1935). Conceived in a climate of fear, the central image of Beckmann’s work culminates in a belief in redemption and metaphysical release from worldly horror. Turned inside out, it is here that the action of Nigel
Cooke’s Departure takes place. Where Beckmann’s characters stand – departed – in a small boat on the calm open sea, Cooke’s characters are cast of their own volition into the unpredictable yet inevitable turmoil of a devastating storm, enduring a grave reckoning against nature. Having embarked upon an ill-fated trip that is to mark the triumph of experience over thought, Cooke’s protagonists are at the same time the subjects of existential crisis and an absence of redemption.

Hubris is destructively confronted by the indifference of the world, and philosophy offers little in the way of consolation. The abjection that Cooke’s characters evince from their circumstances manifests as a kind of courage: a mindless valour in the face of doubt. In the tradition of the fool drawn from Rousseau, Dostoyevsky, Nietzsche and Sartre,
Cooke’s characters play out acts of failure, ignorance and thoughtlessness. These are states of potential rather than straightforward negatives.

Throughout all Cooke’s work, foolish characterisation embodies a ridiculing of the vanities of artistic production, as well as celebrating the creative capacity for intellectual renewal, visionary thought and selfcriticism. Yet with all the uncertainty and incapacity that Cooke describes in his paintings, their coming to be is the result of his own pursuit of purpose and of painting. He demonstrates a technical faculty and deftness of painterly touch that is at complete odds with the pathetic, hackneyed daubs of his subjects. Cooke’s restless intellect has always fed continuous progression. Recent years have seen a subtle transformation of the pictorial content of his paintings as portraits of solitary figures succeed their ghostly, even absent, predecessors.

Cooke’s new series of full length portraits dictate a new and as yet unseen set of circumstances in which Cooke’s thickly bearded heroes of experience immerse themselves in the moment, isolated within a nightclub of some sort. Theirs too is a world of darkness and inescapable solitude, but bluntly contrasted with the palpable dejection and misery of Departure. Their moment is a euphoric peak, captured in full steam on a trip of a different kind.These characters loom large, painters painted in desperate, inglorious isolation: archetypes of creative martyrdom beset by unrelenting dystrophy.
Website:www.modernart.net