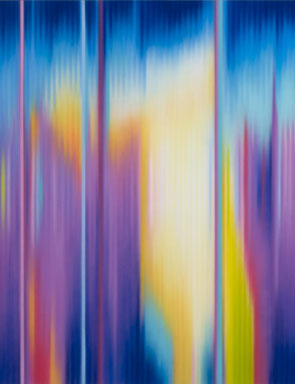 Utilizing pop and rock music as his source material, Bavington acts as a translator between the aural and visual. Guitar solos of the Rolling Stones, Elvis and Oasis become vibrant bands of color – a bold palette influenced by his longtime Las Vegas residence – as they bridge compositional concepts between seemingly disparate fields. Now experimenting with album cover motifs, Bavington exercises his adept employment of duality in homage to his influences in both music and art. While he generates tributes to the guitar gods and vinyl luminaries of his record collection, Bavington simultaneously “covers” the heavy-hitters of contemporary painting by converting popular album covers of decades past into paeans to the color-field paintings of the 50s and 60s: “Give ‘Em Enough Rope” by the Clash becomes a hazy tribute to Mark Rothko while “Blue Monday” by New Order is a gleaming rendition of Kenneth Noland’s concentric circles.