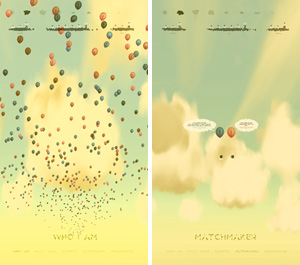 Image:The Who I Am and Matchmaker movements

Artist and computer scientist Jonathan Harris will speak as part of Pratt Institute’s Department of Ditial Arts Lecture Series at 12:30 p.m. on Wednesday, April 14, 2010, in Lecture Hall E2 in the ARC Building, Lower Level on Pratt’s Brooklyn Campus. Harris’s lecture will be free and open to the public; however, seating is limited.

Harris makes projects that reimagine how humans relate to technology and to each other. His projects combine elements of computer science, anthropology, visual art, and storytelling. His work has been exhibited at The Museum of Modern Art, New York; Centre Pompidou, Paris; and has appeared on CNN, NPR, and the BBC. He has given talks at Google and the TED Conference and was also a co-designer of the Vermont state quarter.

His work has been called “a fascinating combination of art, science, culture, and current affairs” by USA Today, “astonishing and brilliant” by New York magazine, and “stunningly gorgeous” by The Washington Post.
www.number27.org/
en.wikipedia.org