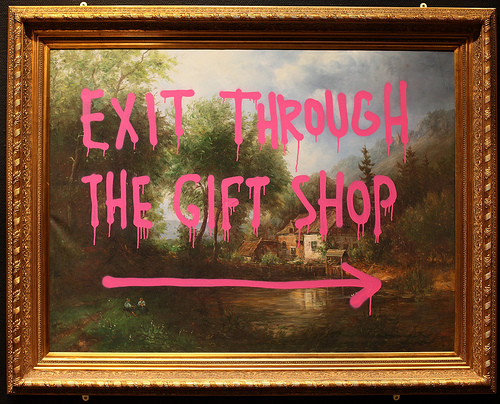 In his never-ending quest to poke fun at the pretentions of the artworld, Banksy has done what every anti-artworld artist wished they could do: sell shit.

How did he achieve this amazing feat? By using a human being as a medium. Banksy has now become the Borat of the artworld and, at the same time, has managed to tell his own success story.
The film starts by telling the story of the fictitious character, Thierry Guetta, who has a passion for filming street artists. Banksy, about whom the film is supposed to be, actually plays second stage to his own alter ego, Guetta.

The story goes that Guetta, a vintage clothing shop owner, does nothing all day but run around filming street artists. Eventually, he meets Banksy and films him as well. Banksy then asks Guetta to edit down his extensive footage into a comprehensive film about street art.
The final edit of Guetta’s street art film is atrocious and Banksy, fed up with Guetta, tells him to “go make art” while he re-edits the film. Guetta, following Banksy’s orders, sets himself to making street art all around LA.

After having learned all of the tricks of the big name street artists (but none of their technique), Guetta begins covering over their art with his own stencils and posters. Guetta then becomes Mr. Brainwash, the renowned street artist.

Mr. Brainwash makes such terrible art that it is obvious to the viewer that he is doing it on purpose. He also produces such large amounts of it in such a short time that the viewer can’t really believe there’s any skill to it.

Mr. Brainwash goes on to enjoy enormous success in the LA artworld while Banksy is finishing the film on street art. When Banksy finally finishes the film he discovers that Mr. Brainwash has become an international success and that he is partly to blame.

The beauty of this film is that Banksy, who used to ridicule the government and police, has now taken the entire art establishment in his sites – and he pulled it off. Everyone falls for Mr. Brainwash, critics and reviewers included. Banksy is simultaneously ridiculing “factory” artists that produce art on such a massive scale that one wonder what the difference between factory-art and Wal-Mart might be?
The ancient Egyptians believed that one helped give life to the gods by creating a statue in their honour, and by creating Mr. Brainwash, Banksy has made himself into a god.