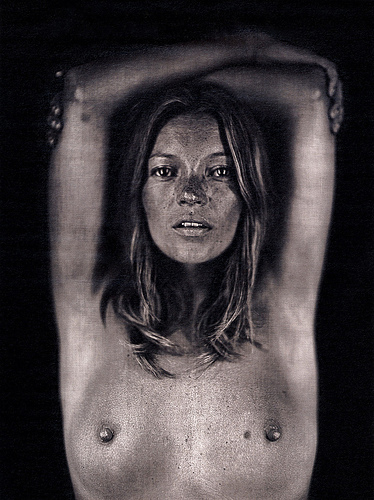 Kate Moss by Chuck Close
Guten tag und greetings mein dear FAD reader. Ah so, it has been quite a day here in New York for your own dear Klaus. I am most pleased to say that I started off with a traditional New York breakfast, eggs sunny side up of course, sausage and that thin streaky bacon you will find here, orange juice and coffee. The coffee here is not of European strength or favour, but they refill your cup for free so that makes a big difference.

I decided that it would be best to make visit to the smaller fairs first before taking on the main Armory fairs over weekend. So, my first port of call was the Scope art fair located behind the famous Lincoln Centre. I met up with mein old friend Herr Hobby of TAG Fine Art, a dealer of fine editions in London.

I am afraid to say that I was disappointed with the overall range and quality of the galleries showing there. There were Asian galleries with obvious Chino-Pop paintings churning out the same old stuff. A few galleried stood out and Galerie Andreas Binder out of Munich deserves a special mention for showing a new series of sun inspired work by the very talented Japanese photographer Izma Kaoru ($16,000 – edition of 5). The Mike Weiss Gallery had the largest stand in the fair and was showing a mixed bag of work. One of their artist’s really stood out – Elisa Johns. Her canvases are beautifully simple yet painterly, inspired by fashion, illustration and mythology – (Athena & Nike – 80” x 78” – $15,000).

Other galleries worth mentioning at Scope include Anonymous Gallery, position right at the front and annoying with no wall information of their artists, after questioning the pretty gallery girl, I was able to find out that the collages were by Greg Lamarche ($900-$2,500) and some uber cool prints were by Kostas Seremetis. The Witzenhausen Gallery had some strong photographs by Hendrik Kerstens and Station Independent Project had some good photography by Miles Ladin and Deana Lawson.

I cannot leave Scope without mentioning the Krel 2 Go girls. They make fashion into art and vice versa. On the spot creations from bits of fabrics, stitched and sewn pieces that are literally good to go. They have been receiving a massive amount of publicity and you can find out more about their next event here: www.krelwear.com

So, we left Scope and travel downtown to Pulse. This fair has a real sense of the moment, with consistently strong galleries exhibiting here. The warehouse space gives the fair authenticity and scale.

At P.P.O.W gallery there were some lovely little pieces by Avrora Robson reasonably priced between $3,000 and $4,500. Over at CTS Creative Thriftshop was an installation piece by Jeremy Dean of a Hummer converted into a horse drawn carriage. This is a clear comment on our contemporary fixation with excess and our dependence on oil to fuel our most lavish modes of transport. The Hummer, entitled CEO Couch was priced at $85,000 and one can pick up chrome or black matchbox versions for $2,000.

There was some good photography to be found here and over at M+B Gallery out of LA, had a couple of impressive photographs by Alex Prager (Rachel and Friends 48” x 62” – $7,500 edition of 5). Richard Levy out of Albuquerque had a stunning Scott Peterman AP for $19,000. Over at Mary Ryan Gallery there were some impressive pieces by Sangbin IM priced at $8,500 in an edition of 5. 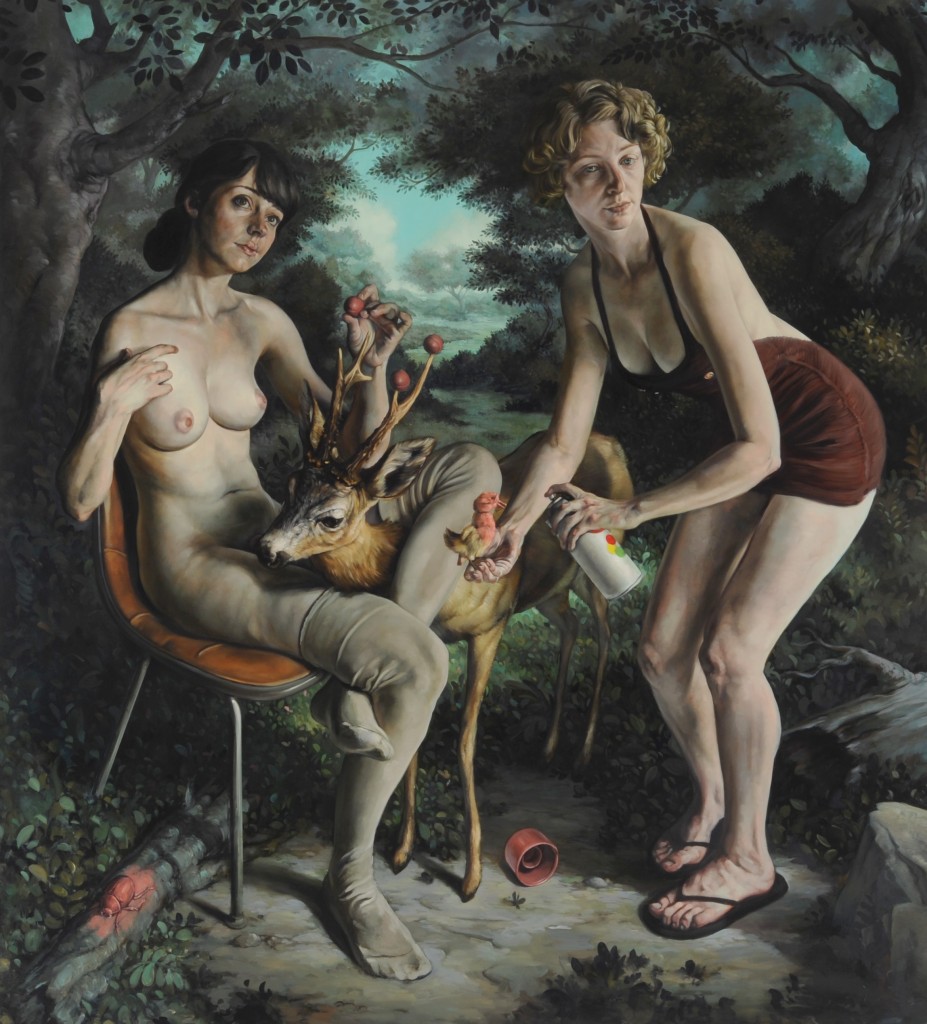 One of the best paintings I have seen so far is the remarkable work of Erik Thor Sandberg, amazing work technically and I was not surprised to learn that the piece shown by Conner Contemporary out of Washington DC was sold for $25,000. I have included an image of this striking work. Another good painting was to be found at Dean Project by Bryan Drury called Feast (72”x48”), priced at an eye watering $55,000.

Big prices were also to be found at Nicholas Metivier out of Toronto, Canada. Where an Edward Burtynski photograph of a Chinese shipyard was on for $23,000 (60” x 48” 2/6) and a Chuck Close piece of Kate Moss was on at $55,000 (edition 9/15).
Other galleries which caught my eye at Pulse was the solo project by Roberto Mollá at Christina Ray (New York) and another solo presentation by Ai Kowada Gallery out of Tokyo, I couldn’t get the artist’s name as the dealer was too busy talking on the phone to speak to me.

Galeria Horrach Moya out of Palma de Mallorca, Spain had a couple of incredible photographs by Adriana Duque, which were both haunting and powerful – ‘Felipe’ from the children series 173 x 143 cm was in an edition of 5 and priced at a reasonable $5,500.

A couple of other galleries worth mentioning is the Hosfelt Gallery from New York, who had a good painting by Gideon Rubin, which was sold for $12,000 and an interesting LED flickering piece by Jim Campbell priced at $55,000 in an edition of 3. Diana Lowenstein Fine Art had a few nice body decorative pieces by Cecila Paredes at the $7,500 mark.

So, now it was time to take some lunch. Herr Hobby and I went to Patis, which is an old favourite French Brasserie. They do a fantastic steak frites, which we washed down with some nicely chilled red wine. Wunderbar.

After a delicious lunch we went to see a Pop –Up show by an urban artist who goes by the name of Mr. Brainwash – The American version of Banksy. Now to my mind you would need to be both rich and brainwashed to buy any of this derivative rubbish. On offer was a collection of portraits of pop stars made up from smashed up piece of old record vinyl and a series of Warholesque portraits of contemporary celebrities including a large piece of Madonna. One comic piece did make me smile, which was a life size New York yellow cab packaged up to look like a matchbox toy version. This was quite funny and clever, although with a very serious price tag of $300,000.

The afternoon was getting on, so I decided to wait until tomorrow to tackle the main Amory fair on the Piers and headed uptown to make visit to the Volta art fair. The fair is located on 34th Street opposite the Empire State Building. I have always been a fan of the Volta art fair since it’s inception in Basel, Switzerland.

The quality of the galleries who exhibit there is really first rate and I would recommend this fair to any serious collector. This year the organizers have insisted that the participating galleries do solo artist presentations. The fair is so much better for it, as one can really gauge artists’ calibre by seeing a collection of their work rather than various artworks vying for attention within a small space. This policy does have a drawback; if a collector is not taken with the particular chosen artist then that is that. But it does make the viewing much more rewarding.