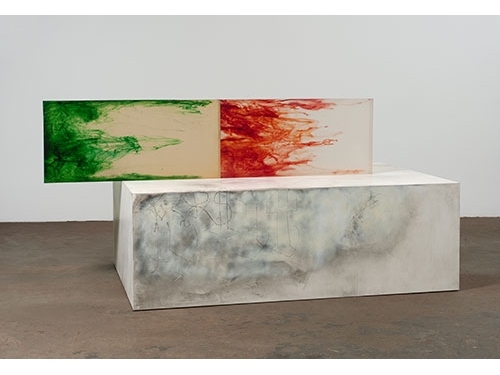 Sterling Ruby is attracted to Mapplethorpe’s work because of “(…) the choice of subject matter and the contrast between marginal subcultures and the formal beauty of his flowers and still lifes”. The formal beauty of Mapplethorpe’s work is fascinating, but it also raises questions about the motives of the artist. Does he want to create distance from his subjects? Is he a collector? Are flowers, penises and bodies one and the same for him?
The work of Sterling Ruby explores control and the concealment of subjectivity. His collages entitled Transcompositional are based on maximum-security prisons like Pelican Bay and Guantanamo. Yet there is almost nothing in them that refers to isolation or prison life. The collages consist of a pattern of nail varnish on a background of mirrored paper. They also contain photographs of transsexuals. The relationship of the artist with his subject is far from clear. Is he playing the role of a predator? A prisoner? A schizophrenic?

Ruby strives towards a transgression of fixed identities. He departs from preformed dichotomies such as beauty/marginality, architecture/vandalism, Zen/subculture. These contradictions are perverted in his artworks. Thus, the sculptures from the series Acts consist of two parts, which together form a contradictory whole. The square, geometric pedestals bear traces of graffiti. The sculptures themselves are an explosion of liquid and solid colour held fast in a block of urethane. Their form eludes liquid and solid, volume and colour, beauty and abjection.

Sterling Ruby’s work opens and closes meanings. It stimulates new suppositions about art and irrational readings of his work and the work of Robert Mapplethorpe.