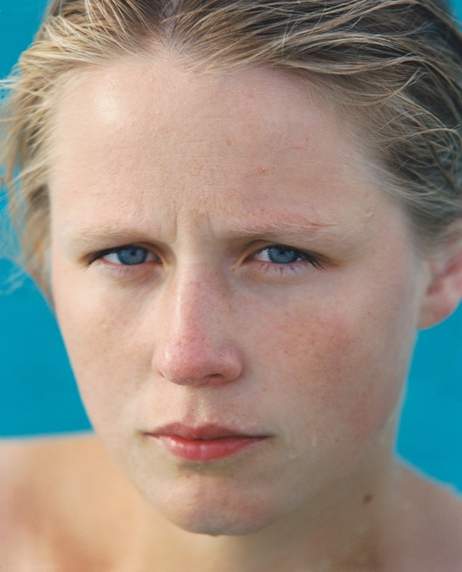 Roni Horn, You are the Weather (detail),1994-1995. Thirty-six gelatin silver prints and sixty-four chromogenic prints.10 ½ x 8 ½ inches each. © Roni Horn
November 6, 2009-January 24, 2010
For more than thirty years, Roni Horn (b. 1955) has been developing work of concentrated visual power and intellectual rigor, often exploring issues of gender, identity, androgyny, and the complex relationship between object and subject. Because the artist chooses not to privilege any one medium, Horn’s art defies easy categorization. Materials – often used with remarkable virtuosity and sensitivity – take on metaphorical qualities and relate key themes with great visual power. Horn’s interest in doubling and identity, for example, is central to understanding her approach to the genres of portraiture and landscape. Image-specific photographic portraits and ethereally beautiful abstract cast glass sculpture relay aspects of both. Similarly, Horn’s intricately cut and pigmented drawings suggest something of the elemental nature of the earth that relates in turn to how the landscape of Iceland, where Horn has traveled and made work since 1975, has informed her practice.

Jointly organized by the Whitney Museum of American Art and Tate Modern, Roni Horn aka Roni Horn is the most comprehensive overview of Roni Horn’s work to date. The curators, who are working in close collaboration with Horn, are the Whitney’s Chief Curator and Associate Director for Programs Donna De Salvo and curator of drawings Carter E. Foster, and Mark Godfrey, curator at Tate Modern. Following the Whitney’s presentation, it travels to The Institute of Contemporary Art, Boston, where it will be on view from February 19 to June 13, 2010.