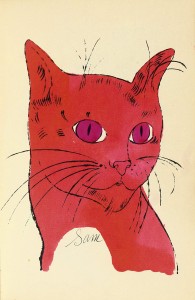 A range of subjects by Andy Warhol (1928-1987) are on offer in the contemporary section of the sale ranging from Lenin to Marilyn Monroe, including the particularly endearing 25 Cats name[d] Sam and one blue Pussy, circa 1954 (estimate: £35,000-45,000) detail illustrated above. This complete set of eighteen offset lithographs with hand-colouring (including the cover), is one of Warhol’s earlier series, which suggests a much more personal tone.