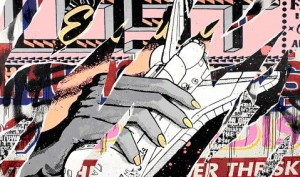 Image:FAILE: 99C PARADISE (2008)
www.newlynartgallery.co.uk
The exchange gallery holds a show of post pop and pop art in an asthetic attempt to enquire about the change of emphsis within the role of pop art in the last thirty years.

The limited space is used well to achive a sense of the veiwer questioning the bombardment of the images with messages of 21st centuary life.

Individual pieces are selected to do this across the spectrum of pop art production and the result is one that allows access to this point quickly. Its a show to head to with some great peices by a broad selection of artists. Warhol who has the bench mark piece stakes a claim as the starting point and clearly demonstrates the evolution of pop into the realms of confusion, stress and high anxiety that has bubbled to the surface in contemporary pop art. Cindy Sherman, Koons provide the other signature works of the curation. on until 6th October, Newlyn Cornwall.

Plastic Culture examines the influence of the 1960’s Pop Art movement on subsequent generations of artists in the UK, USA and Japan.

The pop artists of the 60’s embraced imagery from the everyday world of advertising and mass media in general, typified by a celebratory attitude towards consumer culture. The artists in this exhibition indicate that the ‘pop art’ of today is more concerned with a sense of collective anxiety, brought about by the Capitalist ideals of the new millenium.