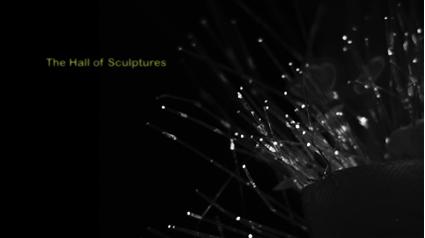 USER GROUP DISCO is a 15 minute HD video. It is the second work in an ongoing series, in which each episode unfolds a different room within the notional architecture of a fictional Institutional building.
This video is set in the Hall of Sculptures, although when the work opens there is nothing there, as the narrator says, that would deserve the name of ‘sculpture’. There is just littered debris: defunct, damaged, unidentifiable things. There are also no people here – no apparent human action, and no visible architecture. The only things visible are the objects themselves – a debris comprised of mundane and ubiquitous objects, utensils and ornaments. And these things drift in a black void.

What ensues during the course of the video, is a series of reveries and hallucinations concerning these objects. These dwell upon the Institution that holds them, upon categories of distinction between art objects and social history artefacts and the strange and compulsive desires of consumerism. They draw upon philosophical and historical materialism, surrealism and institutional critique to try and understand what objects are, and what they do. The various fantasies of the video are linked together by the recurrence of the image of a spiral or turntable and the material phenomenon of shine, occurring upon surfaces of chrome, vinyl, ceramic and glass.

Everything in the video is a bricolage – every image, whether of a stellar constellation or a pornographic dance is derived of existing artefacts and the narration too is a collage of texts, a litany of celebrated male authors. The video draws inspiration from the films of Painleve, and of Resnais, mainly ‘The Styrene’s Song’ and ‘Even Statues Die’ (with Marker) as well as John Carpenter’s ‘Assault on Precinct 13’ – but is emphatically a video work, exploiting the heterogeneity of that medium to conflate genres of art, fiction, advertising and documentary.

The soundtrack, specially commissioned for the video, has been composed by Jem Noble. It comprises an electronic soundscape for the interior of the Hall of Sculptures, interrupted by the occasional melody – and these tunes also are a bricolage of existing things.
Elizabeth Price has recently exhibited in ‘Word/Event’ at the Kunsthalle Basel, and ‘STRANGE EVENTS PERMIT THEMSELVES THE LUXURY OF OCCURING’ at the Camden Arts Centre, London. Her recent video ‘At the House of Mr X’ 2007 will be screened at the BFI on the 22nd April (in conjunction with Stanley Picker Gallery). She is based in London and is represented by MOT International.