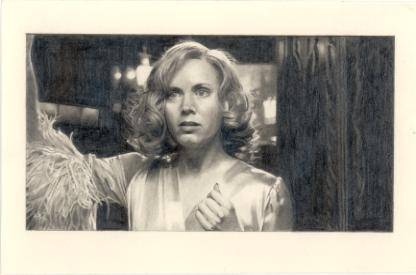 Although Kate Atkin took her MA in photography (2003-05) at the Royal College of Art, she actually makes large-scale, intricate pencil drawings which she thinks of as slow-paced ‘re-enactments’ of what is shown in a photograph. Atkin also works in other media: her sculpture was recently selected by Richard Cork as part of the exhibition A Life of Their Own at Lismore Castle in 2008. She has work in the British Council Collection and UBS Art Collection amongst others. Film inspires Marie Harnett’s work. She makes series of highly detailed, minuscule drawings derived from film stills, which capture fleeting moments of drama, suspense or beauty.

In 2007 Harnett was selected for the Contemporary Art Society’s ARTfutures at Bloomberg Space and exhibited at The Aspect Prize at The Paisley Museum. She showed at Brave Art in 2006 and more recently was shortlisted for the Threadneedle Figurative Prize at the Mall Galleries. Harnett graduated from Edinburgh College of Art in 2006. Nathalie Guinamard is ‘interested in using a medium associated with editing and erasing for creation.’ Her complex collages are both playful and uncanny and have a dark, surreal quality. Guinamard was shortlisted for the Jerwood Drawing Prize and ARTfutures in 2007 and was included in the Red Mansion Art Prize exhibition in 2008, following a residency in China. She has a forthcoming installation at the Rivington Grill in Shoreditch.

She graduated from The Ruskin School of Drawing and Fine Art in 2007. Eilidh Young makes works on wood and paper which reference technical drawing books and photographic images of architectural ruins from lost cities of the world. By taking elements of the structures and reconfiguring them through the act of drawing, she distorts the perspective and creates complex geometrical forms. In the exhibition, she is also exhibiting a series of photopolymer prints based on Fellini’s 8 ½, the director’s dense classic about the film-making process. Young graduated from Glasgow School of Art in 2007 and was selected in the same year to exhibit at Brave Art in London. In 2008 she was included in the New Faces exhibition at the Leith Gallery in Edinburgh