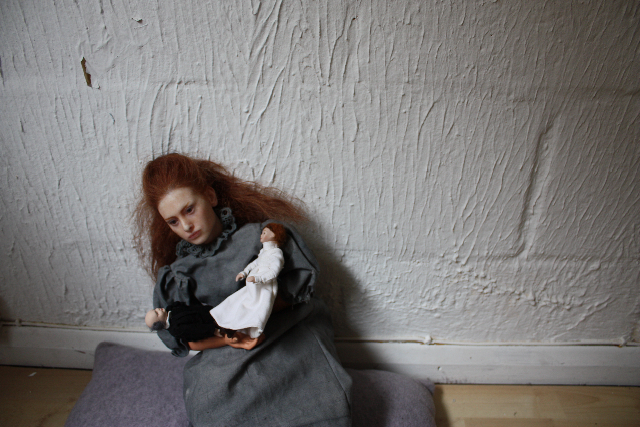 The Dolls’ Day films, constructions, drawings 8 – 31 January 2009
THE DOLLS’ DAY is the day when we become the instruments of our memories. THE DOLLS’ DAY leads to the transformation of the bodies flesh and blood into puppets. The ‘mise en scene’ of the characters into constructions or using her own blood to create drawings from the film’s characters became an evidence. It was about reversing the film process.

Alice Anderson gazes into the tale mirror to question her past and her identity. “What I try to do in my work is say something about my past. To do that, I construct narratives based on memories and objects that awaken certain feelings in me, sentiments that are often violent. The imaginary dimension of the folktale lends itself particularly well to this reinterpretation of the past.

The concept of a fairy is interesting, because it is linked to the idea of female speech. The word fairy comes from Fata, which means fate, the goddess of destiny and also the word Fari, to speak. Fairy tales are women speaking. But my work has nothing in common with the ‘girly’ aspect of fairies. My tales are like those of Angela Carter and Marina Warner, with no moral, no princess and no Prince Charming. My heroines are strong women. They’re never passive. The opposite of Walt Disney women characters. In that type of tale, women are projections of masculine desire. In mine, men are the projection of feminine desire !.. (Laughs)”

‘Philologists were once fascinated with uncovering the building blocks of the folk and fairy tale, showing how the same small set of elements was used to compose the widest range of human stories. Finding this battery of stock figures and relations between them could only highlight the artificial nature of story construction. And the moment this is applied to the intimate space of a family, we are moving towards a symbolic dimension in which narratives are being used to resolve the impossibility present in a group of relationships. This is what Freud discovered with his ‘infantile sexual theories’: stories were used by children to make sense of what most resisted meaning (childbirth, the parents having sex etc)..’

BLOOD DRAWINGS, Series II, blood on paper, 20 drawings, 21 x 29 cm, 2008
‘Drawings in her own blood, she gives shape to her anxiety. The Blood Drawings are traces of an intimate experience.’
Maud Jacquin

FILM, The Dolls’ Day, 10 minutes, 16/9, London 2008
‘The Dolls’ Day harkens back to the spirit of Prompt Book, 2005, The Woman Who Saw Herself Disappear, 2006 and Bluebeard, 2007. In this new tale, though, the girl, also caught in a vice between the mother and the father, frees herself this time by the destruction of the parents. The red-headed girl specifically displays the rise of a malaise linked to enclosure. This is the story of thwarted desire for a child. The daughter remains without a name, anonymous, and submits to her cruel destiny. Born a girl and not a boy, the daughter has not been declared and lives in seclusion. This is the closed-door story of a terrible and pitiless universe in which dolls and living beings cannot co-exist. The film, through the metamorphosis of the father and the mother, carries out the daughter’s vengeance.’
Mo Gourmlon

Alice Anderson
Born in London 1976, from an English Father and a North African mother, Alice Anderson grew up in the South of France. This is where she started her storytelling and her paintings about her family. She then studied Art at the Beaux-Arts in Paris and at the Goldsmiths College in London where she has been living since 2004.

Her works has been shown in institutions such as Tate Modern, Tate Britain, Pompidou Centre, The Grand Palais, Leon Museum and Mudam Museum. Recently she has had a series of simultaneous solo exhibitions at the Picasso Museum, the Frac Paca and at Marc Chagall National Museum where she set more than 3,000 meters of red hair going through the entire museum in a gigantic installation called ‘Rapunzel’.
Art Projx