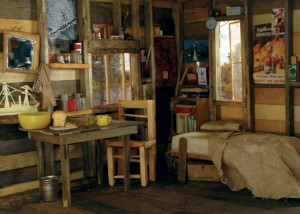 Ethan Hayes-Chute went to get wood December 4, 2008 – January 17, 2009
opening Thursday December 4, 19:00
Ethan Hayes-Chute’s hut is so basic, so familiar, so ordinary, and such a mess that at first glance one might mistakenly call it primitive. In modern architecture, the primitive hut has frequently been invoked in the search for historical origins, as part of the attempt to return to or better propose architecture in its most rudimentary state: as shelter, as mere dwelling space. In this tradition, Abbé Laugier conceived an elementary hut in 1753, comprised of four timber columns spanned by four beams and a pitched roof. All structure, it was unabashedly exposed to the elements; a functionless form that neither encapsulated nor enclosed. Part and parcel of the exterior natural world, Laugier’s creation was decidedly romantic.

In contrast, Hayes-Chute’s hut is an accumulation of stuff, the ephemera of the every day. Its materials are found, stitched together, hand-assembled – chair, desk, table, shaving mirror, and coffee mug furnish the cabin’s primary function to house and sustain. His project is not a search for origins, rather, attributing architecture to such earnest teleology is a practice long since obsolete. The hut housed within PROGRAM’s gallery space is so commonplace that it eludes temporality, seeming to exist as it had or will somewhere else, at one time or another; in any one place or culture. Here, the hut is an interior world that we ourselves may inhabit, a world comprised of stories built as much from salvaged wood as from accumulated fictions. The “primitive” hut in architecture is no longer simply that.
– text by Tina Di Carlo

Ethan Hayes-Chute (1982) was born in Freeport, Maine, USA. He received a BFA in painting from the Rhode Island School of Design in 2004, and has lived and worked in Berlin since 2005. His work has been exhibited internationally and he is represented by CITRIC Gallery in Brescia, Italy. In April of next year, he will be participating in the Portland Museum of Art’s 2009 Biennial, in Portland, Maine, where he will construct a further large-scale installation. [www.ethanhc.com]