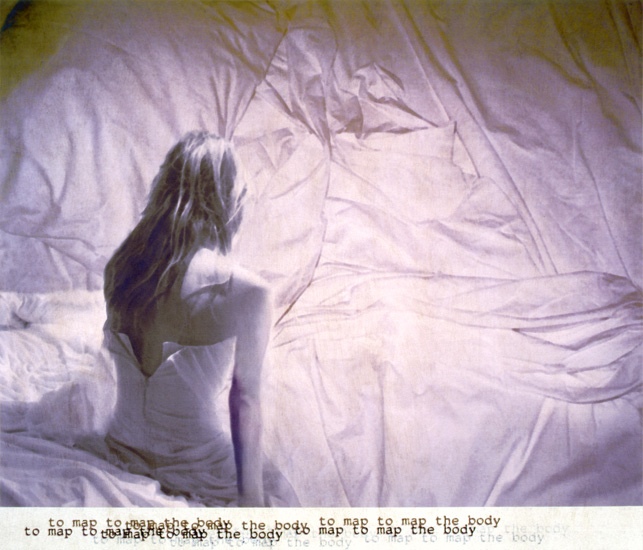 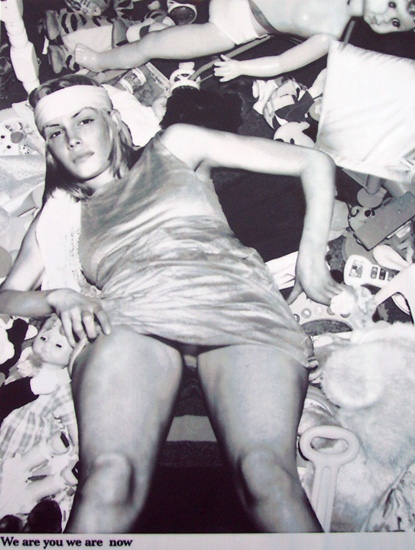 Since the 1970’s, Astrid Klein has been at the forefront of artistic developments regarding the handling of a diverse range of media and the utilisation of a variety of complex techniques, centred around an on-going investigation into the confrontational relationship between image and text. Through painting, collage, photography and installation, Klein encodes, reduces, and reproduces individual figures and fragments out of extensive textual and pictorial material, creating images which relate to themes such as religion, social role models and power structures in society.

The artist’s textual sources, in addition to her own texts, reflect a preoccupation with literary, philosophical and scientific writings, and are incorporated in the ‘Schriftbilder’ (script image) in a way that the form and visual appearance of the text plays as important a role as its content, if not more so. Klein’s compositions are unique in their exploration of a highly original aesthetic, based on the reduction of colour to black and white, and references to popular mass media imagery, symptomatic of post- modern art. Spanning over thirty years, Klein’s œuvre includes not only collage, but paintings such as the ‘white paintings’ (1988 – 1993), carpet and filmic works (Installation at the Hamburger Bahnhof, Berlin, 1999/2000) neon sculptures and light installations, through which the artist pushes the boundaries of visibility and the idea of rendering the invisible visible and presenting the unpresentable.

The artist’s second solo show at the Berlin gallery will showcase work produced in the 1980’s, alongside a new series of collages. The title of the exhibition is taken from a work of philosophy and Marxist critical theory by French philosopher and artist Guy Debord. Published in 1967, the text focuses on ideas surrounding the degradation of human life, mass media and commodity fetishism, and comparisons between the role of religion and mass media marketing. Debord’s critical view on social functions, values and structures of behavior are frequently repeated themes in Astrid Klein’s work.

In the main gallery will be a selection of six photo collages works on display, all of which were produced in the 1980s. The series illustrates Klein’s use of the negative collage technique, in which the artist manipulates photographic material taken from film, TV, advertising and journalistic texts, inverting found footage, layering images, using multiple exposures and adding fragments of texts. Marking a departure from a focus on the representation of women, which is prevalent in Klein’s work from the 1970s, the collages from this period reveal a more subtle, abstract approach to the mainstream media, whereby the manipulation of the photograph and the relationship between word and image become increasingly complex, dealing with issues of perception and estrangement. By transforming familiar images, such as that of building facades and barbed wire, Klein eliminates the viewer’s ability to recognize and understand the pictorial material, which is no longer fixated on its original, but is a timeless fragment with no tied meaning.

An early large-format neon sculpture Fly Catcher lll (1987), will also be on view in the main gallery. The works in neon, a medium Klein began working with in the late 1980’s, demonstrate the artist’s employment of a wider variety of mediums to further explore the relationship between text and image. Instead of forming text from neon tubes, in the tradition of contemporaries such as Bruce Nauman and Joseph Kosuth, Klein uses the material as a background for her luminescent works, on to which the texts are engraved, or injected with black and red ink.

In addition to her classic work from the 1980s, there are also four collages on display in the gallery, all from a new series. The works reveal an experimentation with new materials; polyester, photographs, metal, acetone and tape, applied on cardboard and preserved under resin, lending the compositions a rough finish through the partly rusty surface. In Untitled (Lydia C Reward) (2012), images of three female figures: a Titian nude, a Mexican feminist rights activist, and a French actress are mounted with glue and tape on to two panels of rusted metal alongside found footage of a ruinous landscape.

The use of fabric tape is also evident in Untitled (Le spectacle n’arrete pas) (2012). Here, lines of overlapping text from Guy Debord’s theory, repeated in French and German, are rendered almost illegible by the application of dark paint. Though the emphasis still lies on the uncanny quality that underpins all forms of representation, Klein’s new work further blurs the boundaries between word and form, focusing on a more painterly, material aspect of expression.

About The Artist
Astrid Klein has been awarded prizes including the Käthe-Kollwitz-Prize of the Academy of Arts, Berlin (1997) and the KUNSTKÖLN-PRIZE in 2001 (now the Cologne Fine Art and Antiques-Prize). Solo exhibitions include the KW Institut for Contemporary Art, Berlin (2005), the Hamburger Bahnhof, Berlin (2002), the Neue Museum, Staatliches Museum für Kunst und Design, Nuremberg (2001), The Kunsthalle Bielefeld (1989), a traveling exhibition of the Kestnergesellschaft Hannover, the ICA, London, the Secession in Vienna and the Forum Stadtpark, Graz, Austria (1989), as well as the Museum of Contemporary Art, Seoul (1991). Important group exhibitions include Weserburg Bremen, Germany, (2011), KW Institut for Contemporary Art, Berlin (2005), the Martin-Gropius-Bau, Berlin (1997), the Museum Ludwig, Cologne (1996), and the Walker Art Center, Minneapolis, USA and the Solomon R. Guggenheim Museum in New York (both 1992). Works of the artist are part of prestigious collections, among them the Tate Modern, London (since 1988) and the Collection Falckenberg, Hamburg. She also participated at documenta 8 (1987) and the 42nd Venice Biennale (1986). She has held a professorship at the Academy of Visual Arts in Leipzig since 1993, but lives and works in Cologne