My parents always had an interest in the arts, both of them having been to art school in the late sixties. My mother had always painted, and my father is illustrator Arthur Ranson who had produced work for Look-In magazine, and later 2000AD. It had always been very natural for me to pursue a career in the arts.

Prior to my Foundation at Southend School of Art in the mid 80’s I had been involved in producing my own fanzine as part of the Anarcho Punk scene of that time. It was on the strength of this work that got me into college initially. This later led to a degree at Falmouth College of Arts and later the Royal College of Art. Over the years I have been occupied in the production of both a fine art and commercial output. Whilst in London I have always sought to publish illustrations as well as exhibit and curate art shows.

I have always been very driven by my creative impulses. I wouldn’t say it’s been easy to maintain an output, attempting to balance this necessity, with work commitments. The drive to create imagery and the satisfaction I get from the manufacture and completion of an idea is what always makes it worthwhile.

Inspiration comes through absorption in many areas. Those of music certainly, of literature, film, looking at the work of other artists. I try to work in a very intuitive way. The process of creating work takes various stages. The initial work that goes into researching and constructing a piece is very logical, technical. It can even be very laborious and time consuming. But this then leads to a process, which like I say is one that is more intuitive, more improvised and driven in a more emotional and explorative way. The goal is to establish a sense of wonder and excitement in what I have produced. This is the desired outcome always.

Because my work is often informed by historical references, primarily 18th and 19th century art and literature, often it is this accumulation of research which forms the basis for inspiration. It has always helped me to discuss ideas and projects with peers also. It is this calmative process which then enlightens the creative process

It comes back to this contradictive technical process I operate under. The construction of an idea or image through very traditional means, one of research and drawings made from this research. Although highly informed, the eventual aim is one that will transform and create something new with this information. The message? This is often one of subverted cultural interpretations of history.

Recently I have begun to explore the use and potential of short animated sequences using works originally intended for print. For a recent project Terra:Extremitas undertaken for theatre company FoolishPeople, I was commissioned to produce a series of animated projections that formed the backdrop to the choreographed drama. Originally it had been purely a logistical issue of finding ways to get round practical implications of transporting very large 2 dimensional works to Amsterdam where the project was to take place. But it is something I now wish to explore further.

The artists I admire most I guess are those that embody techniques and ideas I feel I might lack and which I can only hope to emulate. The work of painters who allow themselves a very free, expressive and painterly style, Philip Guston, Anselm Keiffer, Marlene Dumas. Post-Impressionist painters who represent very sensual and ‘joy of life’ subjects like Bonnard and Matisse. Contemporary artists who I guess have informed my work more than most would be Cathy de Monchaux, Paul Noble, The Chapmans, Keith Tyson.

A lot of my art isn’t made. Many of the drawings and images I produce are not resolved. Resolved in that they are not made into final and completed works to be exhibited and seen.

10 What does being artists mean to you?

It can mean having a certain amount of freedom to have a say and a control over what I do every day. This I value a great deal.

11 Are you happy with your reasons for making art? I.e. are there any trade offs that make life hard?

I’m very serious when I’m in the process of making work, it’s a constant battle of questioning my motives for things, trying lots of ideas out until a synthesis I’m happy with occurs. I don’t always enjoy this process; it’s a psychological struggle. It’s just what I have to go through before I can be happy with what I do. Life’s hard anyway without the trade offs. It just is….. for everyone.

The works become successful when they satisfy a certain conceptual and aesthetic goal that I may have had in mind. The most successful are those works which have surprised me in there final conception, that there form is one that although sought had not been anticipated.

The right attitude…and a fair amount of pictorial research.

15 Who prices your work? And how is the price decided upon?

The market dictates the price.

I am currently working on a series of animated films to be screened at Artprojx space in Kensington sometime early next year. I always love the art shown at Ibis Projects and would love to get a show there. More shows internationally would also be an ambition certainly.

The present rise and dominance of the curator appears to have made life very difficult for artists, certainly in London. Artists have now to negotiate there way through yet another level of control. Don’t get me wrong; I’ve seen a lot of shows whose success is largely due to good curation. I just prefer things to be done in a more democratic way. You’re always going to see the market as Pro if your selling lots of work.

As long as people remember something of mine, some aspect I’m happy. There’s an awful lot of art out there to remember….. or forget.

Certainly in my case, I have endeavoured to develop a process, which becomes more efficient through routine. But again, I want the final stages of the creation to have been unanticipated. Always a surprise.

I’m lucky to be living in a city as artistically vibrant as London. It’s a break just to be living here, seeing so mush great art. Often when one goal is achieved I’m looking ahead and planning for the next. It’s all relative.

Most recent?….the work submitted for the Royal College Of Art ‘Secret Show’. All works donated….I always wonder who ends up with them? Someone who’s disappointed they haven’t bought a work by someone famous more likely.

Digging through 5 years of history in the making and excavating the beloved fragments that have made Hackney WickED the ROCK in the rubble. 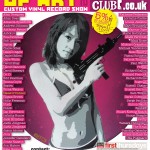