Wednesday October 29 2008 9pm Mathieu Copeland presents the DVD launch
and special screening of THE SAINTS,
a collection of 6 films by Amy Granat with
Jutta Koether,Fia Backström,Mai-Thu Perret ,Angel Turner,Amy O’Neill
A unique screening of all films together and special performances at the Swiss Institute.
swissinstitute.net 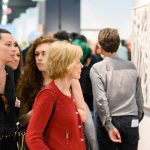 It was announced today that LAAS Group has retained control of Art New York. For the fair’s sixth edition in May 2020 and beyond, LAAS will operate the fair as Art New York, under the leadership of the fair’s previous majority shareholders, Michael Tansey and Brian Tyler.