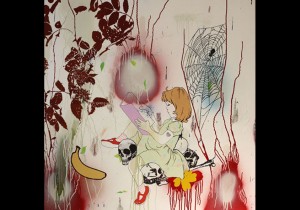 Forster Gallery has just announced Dan Baldwin’s forthcoming solo show, ‘Dead Innocent’, a much anticipated collection of new works, including paintings, ceramics and installations, and his only UK exhibition in 2008. Having enjoyed phenomenal acclaim amongst critics and collectors, Dan Baldwin has spent the past year away from the art world’s gaze, creating a new body of work that resonates even more strongly than before with images and references borrowed from popular culture, art, religious and political history. He paints with excitement and energy, combining symbolic images that rouse the subconscious, challenge beliefs and ideas, and creates an unsettling microcosm of our history, religions and conflicts.

From the symbolic 17th Century Vanitas painters, to political paintings of the 60s by Rauschenberg and Johns, to skate graphics, eBay and aerosols, Baldwin’s influences span the centuries. His dynamic canvases often combine elements of painting, collage, appliqué and printing and give insight to his personal approach as an artist. His works resonate with his thought process and activity, his obsessive layering of paint, print and objects, religious artefacts and rare knick-knacks cohabit in fantastical arenas, where Christ can exist alongside Hitler, whilst birds and butterflies keep score. “I love the contradictions,” he says. “It’s always about balance. There’s always a balance and harmony between life and death and beauty; yet they evoke certain feelings and open up suggestions and arguments between the elements. I want the beauty to draw the viewer in, the colour, the surface, the narrative between the elements, but also the juxtapositioning of the elements to create a fresh evocative energy – be it childlike or sinister or both.” Baldwin’s works can be surprising, shocking even, but also humorous. There is an uneasy democracy between his subjects; the realisation that each figure is reduced by the digestion and regurgitation of our popular culture and has become diluted and impotent is as shocking as their narrative. To coincide with the exhibition, FORSTER is launching a limited edition screen print, and an extended catalogue will accompany the show.

Image:Horn Head Nixon ART MOSH is a melting pot of some of the freshest talent in contemporary art and music. […]

1 If you weren’t an artist, what else would you be? -carpenter-gardener-i dont know ! i was doing a plumbing […]