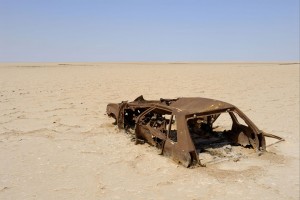 Abandoned and rusty car wreck in desert Tunisia, Chott el Jerid by Sami Sarkis.
The CCCB presents the exhibition “JG Ballard. An Autopsy of the New Millennium”, from 22 July to 2 November 2008. The exhibition features the English writer of novels and short stories, considered one of the most intelligent, seminal voices of contemporary fiction.

The literary work of James Graham Ballard (Shanghai, 1930), the paradigm cult writer, has for some time now been looking ahead to dissect the world in which we are now living. His visionary imagination grew in the realms of dreamlike, subjective science fiction and gradually came to embrace an aseptic hyperrealism. Deep down, the themes are always the same: the keys of contemporaneity and the pathologies of our immediate future, as though he were carrying out the autopsy of a stillborn future.

J. G. Ballard has constructed a body of work marked by recurrent themes and obsessive symbols that is capable of transcending generic codes to decipher the present and propose plausible views of the future. This exhibition sets out to offer an itinerary through Ballard’s creative universe: his themes and obsessions, his dissection of the secret keys of the contemporary, the traces of his own life in his fictional body of work, his artistic and literary referents, and his precise, disenchanted intuitions of a future life governed by the concepts of aseptic anti-utopia and disaster.

The exhibition uses a whole range of supports to introduce visitors into the Ballardian world: stage sets, audiovisual installations, the complete library of Ballard’s writings, works by Ballardian artists and miscellaneous documentation.

The exhibition “JG Ballard. An Autopsy of the New Millennium” coincides with this year’s International Literature Festival, Kosmopolis 08. It is therefore included in the festival programme, which devotes a special section to Ballard.

K08 includes two sessions about the work of this English author and his influence on the contemporary cultural imaginary. The first looks at the influence of Ballard’s body of work on Hispanic writers, and the second centres on the English-speaking world, in the form of a dialogue about the various ways in which Ballard’s literature has struck a chord with new generations of writers who identify with the visionary aspect of his work. Participants: Paco Porrúa, Marcial Souto, Marta Peirano, Toby Litt, Bruce Sterling, Agustín Fernández Mallo and V. Vale.

Alpha Channel devotes a further section to Ballard, exploring the audiovisual production inspired by his literature.

The French magazine Science Fiction, edited by Daniel Riche, commissioned a text from J. G. Ballard in which he summed up his personal and artistic credo. The result, published in the January 1984 issue of the publication, was “What I Believe”, a summary of Ballardian poetics which synthesises the obsessions of the author and the ability of his writing to decipher the secret keys of the contemporary world, as well as its disturbing evolutive logic. The canonic version of the text in English appeared in the summer 1984 issue (number 8) of the British magazine Interzone. Below are some excerpts:

“I believe in the impossibility of existence, in the humour of mountains, in the absurdity of electromagnetism, in the farce of geometry, in the cruelty of arithmetic, in the murderous intent of logic.

I believe in the non-existence of the past, in the death of the future, and the infinite possibilities of the present.

I believe in the body odors of Princess Di.

I believe in the next five minutes.

I believe in anxiety, psychosis and despair.

I believe in the death of the emotions and the triumph of the imagination.

FROM SHANGHAI TO SHEPPERTON

Despite being fantasy fiction, the literary work of J. G. Ballard handles a repertory of images and obsessions that are closely linked to his own life. These early experiences were to mark his worldview and find a particular form of sublimation in his later literary output.

Son of chemist and textile entrepreneur James Ballard (1902-1967) and of Edna Ballard (1905-1999), J.G. Ballard was born in Shanghai General Hospital on 15 November 1930 and spent his early years in the comfortable surroundings of the international colony in the west of the city. The Japanese invasion of 1937 and the outbreak of World War II brought to an end the hitherto peaceable existence of a British community that ran its everyday life under the aegis of a nostalgia for Victorian society. Between March 1943 and August 1945 the Ballard family was held captive in the Lunghua internment camp.

In semi-autobiographical works such as Empire of the Sun (adapted for the cinema by Steven Spielberg) and The Kindness of Women, the writer revealed the origin of many of the obsessions running through his work. The atomic bomb on Nagasaki, how he adapted to life in a concentration camp and the series of deaths that marked his life (victims of bombings in the streets of Shanghai, the Chinese soldier killed by the Japanese at a train station, the first corpse he dissected in his years as a medical student, the Turkish pilot presumed dead during his years as a pilot at a Canadian base, the premature death of his wife and the death of a close friend) have a correlate in some of the most shocking scenes of his literary work.

The creation of his imaginary world has its epicentre away from the literary circles and bustling cultural life of London, in his home in Shepperton: a territory that the writer considers not as a soulless suburb but as a magical space whose inner light can be freed by imagination, as he illustrates in his novel The Unlimited Dream Company.

J. G. Ballard’s formative years were marked by the attempt to reconcile his incipient literary vocation with the articulation of a voice of his own. His initial contact with psychoanalysis and Surrealist painting opened the door to the construction of a unique and totally distinctive artistic identity. As he saw it, explorations of the unconscious in the fields of science and art offered the most precise reading of the spirit of the time and had predicted some of the more obscure pathways of the 20th century. In the dreamlike, desolate landscapes of Surrealism Ballard recognised the images of his own inner world. His writing not only recreates many of the visions of Surrealism, it also reproduces some of its aesthetic strategies?superimpositions, mirroring, false perspectives, mutations?in order to explain the deep structure of the real.

After discovering science fiction as a reader during his years in Canada as an RAF pilot (1953-54), J. G. Ballard encountered in the genre the ideal framework for his literary creation. From the very first, his sudden emergence in the medium entailed a break with tradition and the dominant currents of the time. To his contemporaries’ technological optimism and fascination for the exploration of outer space, Ballard counterposed an immersion in inner space.

Ballard theorized his singular contribution to the science-fiction genre in an article published in 1962 in New Worlds magazine. “Which way to inner space?” represented a turning point in the evolution of the genre with consequences that only much later became evident. With his theory of inner space, Ballard established a distance between himself and science-fiction forerunners and many of his peers as he sketched out the future direction of the genre. Ballard conquered a new territory for the genre, highlighting the role of science fiction as a mirror of the present and a means to self-exploration.

The idea of disaster underlies Ballard’s entire body of work though it finds its maximum expression in works such as The Drowned World and The Drought. In the face of disaster, typical Ballard characters do not act like characters in a 1970s’ disaster film. Far from trying to re-establish order, Ballardian characters see cataclysm as a focus of attraction and seem ready to accept the rules that this new reality imposes, though this may mean renouncing their own identity, wisdom and, inevitably, survival. In this process, the characters will discover a number of hidden truths about themselves. What is happening is not so much self-destruction as the seduction of change and the tortuous path towards psychological plenitude.

The idea comes from Joseph Conrad, and in Ballard’s hands it becomes the basis for his particular conception of science fiction: a literature that speaks to us of radical changes in mindset, fundamental transformations in perception—in short, of the constant evolution of inner space.

J. G. Ballard’s career entered a feverish state of change in the mid-1960s, following the premature death of his wife Mary Ballard from pneumonia in San Juan (Alicante). His traditional interest in the avant-garde and in experimental literature completely intoxicated his writing, which exploded in a radical switch to fragmentation, technical language and a taste for the abstract. The Terminal Beach (1964) blazed a trail that the later books The Atrocity Exhibition (1969) and Crash (1973) were to take to the limit. The author focussed on a form of contemporaneity marked by the death of feeling and a shift from a physical to a mediatic landscape in which reality and fiction are blurred. The more classical High Rise (1974), Concrete Island (1975), The Unlimited Dream Company (1979) and Hello America (1981) continued to develop this vision of an essentially psychopathological 20th century in which pornographic imagery, technological fetishism and dehumanised architecture converge in a traumatic cosmology.

It is significant, and deeply disturbing, that J. G. Ballard’s literature has moved from science fiction to the realist register without abandoning its main themes. The most recent passage in Ballard’s narrative work?opening with the novella Running Wild (1988) and for the moment closing with Kingdom Come (2006)?tours the aseptic architecture of gated communities, residential areas, technoparks, holiday villages and shopping malls in order to extend the terminal diagnosis of a humanity disconnected from its primary instincts. According to the writer, only injections of violence can disrupt the lethargy and make a new utopia possible.

Ballard’s work represents an open-ended body of work that still has revelations in store for his readers.

On the one hand, Ballard functions as an oracle who is proved right with every day that passes.

On the other, he exerts an enormous influence on creators in all disciplines, from fantasy cinema to industrial music.

Proceeding from the most diverse realms of creation, artists who accept the adjective as a badge of honour are increasingly numerous. To identify oneself as Ballardian is to form part of a widening circle of initiates aware of the central role played by an author who is a stranger to labels and resists any attempt at classification.

At this point, the exhibition immerses us in the work of various authors to have been described as Ballardian: Ana Barrado, Ann Lislegaard, Michelle Lord and creators of home cinema using mobile phones. 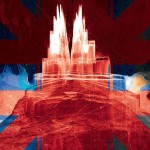 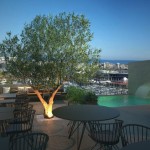 Say hello to the Serras, a ridiculously pretty, squeakingly new boutique hotel in Barcelona, in the building that housed the young Picasso’s actual studio.

This month, the Wallpeople 2013 edition saw thousands of people around the world transform blank city walls into open-air galleries, around the theme of ‘music.’ 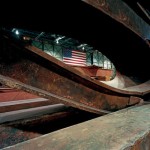 The empty shell of Hangar 17 at JFK Airport became a storehouse of memories when it was filled with the material cleared from the World Trade Center site following the September 11th attacks on New York City.