Slawn follows in the footsteps of an illustrious list of creatives including Dame Vivienne Westwood, Sir Peter Blake, Tracey Emin, Dame Zaha Hadid, Sir David Adjaye and Es Devlin and Yinka Ilori, who have all previously imbued the iconic BRIT award with their own unique and artistic flair and vision.

Slawn’s work is incredible and powerful, and we’ve been blown away by what he has created – his design is bold, exciting and in the moment, and represents what we’re trying to achieve with this year’s ceremony. We were very honoured that he accepted our invitation to put his own spin on the iconic statue and continue the BRITs’ rich heritage of design innovation. I’m delighted to have him on board and to have his work play such a prominent part of The BRITs 2023.

Slawn, who is known for his large-scale canvases filled with a blend of caricature-like pop figures, bold colourful forms, and stylish shapes defined with vivid hues, has been building a strong following for his work since leaving University in London in 2019 to focus on his art full-time. With his art reflecting themes of human psychology, politics, race and other hard topics and issues challenging society, he has amassed a significant cult fan base. Those early to praise his work include the late Virgil Abloh, whom he collaborated with, along with the Mercury Prize winning Skepta, who co-curated a recent Sotheby’s Contemporary Curated auction in which Slawn’s work was sold, and Central Cee. Most recently, Slawn exhibited 12 new works titled ‘On A Darker Note’ in London with Efi? Gallery.

On being appointed as the 2023 trophy designer, Slawn commented:

I’m overjoyed and honoured to have been chosen. It is an incredible privilege to have the opportunity to take part in this celebration of fellow creatives since The BRITs are an iconic, self-named celebration of British creativity, and a genuine testament to the richness of talent-making and producing music both in this nation and throughout the world. The BRIT Awards are a classic celebration of global talent and a powerful forum to genuinely reflect on the shifting nature of culture and the contribution of people to that culture.

Speaking further about the award design:

I wanted to design an award that had a sense of refinement and playfulness at the same time. I am conscious of the narrow line I tread between conventional art and the entertainment industry. I wanted to convey feelings of gratitude and celebration since I know that opportunities such as this don’t come along very frequently for individuals like myself. The concept behind the sculpture is “hats off to you”. My decision to remove the helmet from the award is my way of thanking The BRITs for providing me with this opportunity. I hope that seeing this award inspires not only the British populace, but individuals across the world, including myself, that these feats are achievable.

I’ve created something that I am extremely proud of that I feel represents my past, present and future. The placement of the arms and the decision to have three heads meant that I could create an award that shows a different perspective at every angle. Growing up in Lagos I was surrounded by bronze sculptures, so they have a very nostalgic feel to me. I also wanted to commemorate and incorporate my roots into the design. I hope that in creating this award this is just the start of my journey in providing more opportunity for young people to realise that these achievements are possible with the right support.

The BRIT Awards 2023 will take place on Saturday 11th February – the first time the show will be held on a Saturday in its history – and will broadcast live on ITV and ITVX – from The O2 arena.

2023 will mark 30 years of ITV as broadcast partner, with headline sponsor Mastercard reaching 25 years and 13 years at The O2 arena.

The Bomb Factory presents Journey Mercies, a solo exhibition by Nigerian artist Ken Nwadiogbu. The desire for young Nigerians to travel or migrate from their country provides the context for the exhibition. 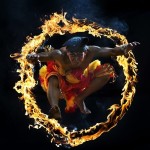