Six large scale paintings are presented alongside a number of “One Breath” works on paper. M’s process is highly performative and unique, adding layer upon layer of paint and other matter onto the surface plane to create works that are both painterly and sculptural. M creates the three-dimensional forms first by pouring household paint, which form giant sheets of colour. He then sculpts the paint sheets onto the canvas, a technique he started over 60 years ago.

M incorporates a multitude of found materials into his work – including leaves, eggs, footballs, sterling silver and gold leaf. Painted plastic sheets are stretched onto the canvas and burnt into the surface with a blow torch used like a brush. In a single explosive gesture, M hammers a large wooden mallet down onto deep pools of acrylic paint and whole eggs, splashing them across the canvas. The collaging of these multiple materials and techniques is a natural choice for M.

“In collaging, you can put things together that shouldn’t be together, and that’s my life.”

M first trained as a painter at St Martin’s School of Art and worked as an artist for the first decade of his career, between 1956 and 1968. Exhibitions include RBA Young Contemporaries (1957 and 1958), Redfern Gallery (1958) and the Institute of Contemporary Arts (1964). A work from his Redfern show was bought by MoMA and his work was well received by his peers including Peter Blake and Richard Lin. From 1968 M channelled his creativity into a group of highly successful restaurants in London and the USA, transforming the experience of dining into a nightly theatrical performance. Such drama and spontaneity are key elements throughout M’s practice, something he owes to his father, the grandmaster of Beijing Opera and national treasure, Zhou Xinfang.

M’s professional return to painting came in 2011, when Jeffrey Deitch, then Director of MOCA, Los Angeles, discovered his work and encouraged him to pursue it as an artist once more. Jeffrey Deitch said:

I knew that he came from an artistic background, but I didn’t know that he was a very serious painter. There is this energy and drive of a young artist, but also this wisdom and experience of a mature man.

Talking to M is like jumping into the Hadron Collider. Ideas are bounced in multiple directions, going everywhere all the time. But there’s always a feeling of us going somewhere. And I find that both a challenge and quite inspiring.

Michael Chow (b.1939, Shanghai, China), also known by his signature name ‘M’, is an abstract painter who creates bold mixed-media canvas collages. M’s practice is rooted in his personal, yet complex relationship with China and underpinned by a cross-cultural dialogue between East and West. In particular, he is influenced by traditional Chinese landscape painting and calligraphy, as well as American and European approaches to abstraction. Uprooted from Shanghai to London aged 13, M lost his sense of identity and connection to Chinese culture; he notes that since then, ‘Everything I have done or accomplished has been an attempt to reconnect with my culture.’ (Louise Lui for Glass Magazine, 2014). Following his studies at London’s Saint Martin’s School of Art (1956) and the Hammersmith School Building and Architecture (1957), M had a number of successful exhibitions in London between 1957–1965. He subsequently dedicated his professional life to celebrating Chinese culture, notably through his world-renowned restaurants, MR CHOW, which first opened in London on Valentine’s Day 1968.

After a 50-year sabbatical and under the encouragement of friends Jeffrey Deitch and Julian Schnabel, M
returned to painting. In his creative process of deep, personal exploration, M explains that his use of collage serves to ‘put things together that shouldn’t be together, as that’s my life’. The physicality of M’s creative process lends his work both sculptural and performative qualities. In M’s paintings, he uses elements to enhance the experience of the work by bridging sculpture and painting and vice versa, creating a distortion of space through time. Hammering paint across paper, burning plastic and laying eggs onto canvas, supplementing them with gold and silver leaf his paintings become grand gestures and moments of theatre. Drama and spontaneity are key elements of M’s work, something he owes to his father, the grandmaster of Beijing Opera and National Treasure, Zhou Xinfang. 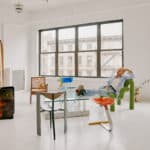