The Bronx Museum of the Arts NY city’s only free contemporary art museum has revealed schematic designs for the renovation of its new multi-story entrance and lobby on the corner of Grand Concourse and 165th Street by Marvel, an award-winning architecture, landscape architecture, interiors and urban planning practice. Marking the Museum’s 50th anniversary, the $26 million renovation is supported by city funds––with additional support from the state––and is overseen by the New York City Economic Development Corporation (NYCEDC) on behalf of the New York City Department of Cultural Affairs (DCLA) and The Bronx Museum, and is slated for completion in 2025. Coinciding with this announcement, the Museum is pleased to share a refresh  of its brand identity and website by New York based strategy and design studio Team. It is the first time the Museum’s identity has been redesigned in over two decades.

The Bronx Museum was founded in 1971 by community leaders and activists at a time when the borough was in crisis, and for half a century has carved an identity as a museum dedicated to social justice. The Museum remains committed to investing in its local communities and the belief that art and culture are essential on the path to achieving social justice and equity.

The Bronx Museum was founded for the people of the Bronx, and has become a globally recognized institution. With the renovation of our entrance and new identity, we hope to further our mission to not only champion artists who are not typically represented within museums, but also amplify our ability to educate, engage and provide a critical gathering space for our communities.

Marvel’s renovation of the South Atrium will elegantly integrate the South Wing with the North Wing by utilizing a unifying architectural language and a reimagined, spacious lobby with a seating area, a gathering space, and large street-facing displays for rotating installations. The relocation of the main entrance towards the highly-visible intersection of Grand Concourse. and 165th Street will open up the Museum’s reach and expand the experience to the sidewalk, offering multiple visibility opportunities for art and public programming from the street.

Marvel’s design for the renovation and expansion of The Bronx Museum channels the Bronx’s can-do, hip-hop creativity and resourcefulness. More than a museum, The Bronx Museum breaks down barriers, is a source of culture and a gathering space for the community, and visitors from around the globe. The Marvel team is enthusiastically working alongside The Bronx Museum to blur the boundaries of building and sidewalk, and reach a city-wide audience. In designing a new front door for the people of the Bronx, we are opening the Museum’s exhibitions, programs and events for the entire community to enjoy.

The design principles are rooted in the Grand Concourse’s history and the building’s evolution throughout the past four decades. Marvel’s primary design goal was to unify the Museum’s multiple buildings into a single experience and make it a recognizable public destination within the Bronx. Not only focused on the cohesion of the exterior but also internally, the renovation offers new connections between both buildings and allows for a fully accessible route through all the galleries. Stemming from the articulation of the 2006 North Wing addition, Marvel utilizes folded copper bronze panel roofs that reflect the warm tones of the surrounding brick and tie to the art deco influence of the Concourse district. Furthermore, the design pays respect to the existing synagogue building from 1962 by stripping down the dark metal panels that conceal brick walls of the original design.

Marvel proposes an architecture that is accessible and open to all with no visual interference to the multiple layers of art and activities happening inside the Museum. The building is glazed on all sides, interlaced with glass fiber reinforced concrete (GFRC) textured walls that serve as interior exhibition surfaces and frame the views into the deeper gallery spaces. The project aims to bring the street into the gallery and bring the gallery back to the street, blending the boundary between the two, keeping in line with the active street life of the neighborhood. The expansive triple-height project space at the corner offers a clear opportunity that allows art to be visible to pedestrians and invites newcomers inside. As soon as one enters the Museum at the intersection of the roof planes, the visitor is immersed in the museum experience, stepping into a welcoming space that aspires to become the Bronx’s new living room.

Led by award-winning design firm Team––known for their work with such arts organizations as Philadelphia Contemporary, Absolut Art, and the Foundation for Contemporary Arts––the redesign of the Museum’s logo and website mark a crucial step in the revitalization of its identity after half a century of serving the Bronx. Formulated as The Bronx Museum celebrates its 50th Anniversary, the new brand identity is bold, distinct, and resilient so as to reflect the ethos of the Museum and its vital work at the intersection of art and social justice.

The Bronx is the only borough in New York with ‘the’ in its name. The Bronx Museum’s new logo proudly embraces ‘the’ as a confident declaration of the institution’s acclaimed history and vision. Anchored on ‘the,’ the bold design system features striking typography and an expressive palette that embeds the museum name in all of its programming, events and initiatives. The new identity is dynamic, expressive, and the shorthand for everything The Bronx Museum represents: the culture, spirit, and tenacity of the Bronx.

Just as the new entrance provides wider public access to the Museum, so too will the new website—which, for the first time, will provide a bilingual user experience with Spanish translations and  prominently display The Bronx Museum’s rich archival material, including educational initiatives such as the Teen Council. An unparalleled program offering paid opportunities for young people to deeply engage with contemporary art and the museum space, the Teen Council has conducted an ongoing series of interviews, since 2005, with artists including Firelei Báez, Njideka Akunyili Crosby, Layota Ruby Frazier, Jamel Shabazz, and Sarah Sze.

A little over fifty years ago, The Bronx Museum was founded by trailblazing activities during a time of upheaval and instability in the Bronx, and in the ensuing years, the Museum along with the community experienced both great accomplishments and profound challenges,

Each time, we, along with the Bronx, grew stronger and met the challenges valiantly, humbly, with purpose and resolve. While the road ahead is exciting and bright, we are poised, nimble, and ready to take on any challenges that come our way. Because the future is a shining beacon before us, and we are Bronx Strong. 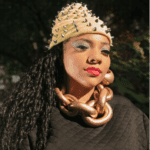 The Bronx Museum of the Arts will open Abigail DeVille: Bronx Heavens, the artist’s first museum survey which will examine the myths and realities of local, familial and ancestral histories and the convoluted notion of freedom in a country fraught with oppression and racism.