The Drawing Center, in partnership with Musée d’art moderne et contemporain Geneva (MAMCO), will bring together the drawings of General Idea authored between 1985 and 1993 for the first time in the United States, and again in Geneva in February 2023.

Investigating motifs in the group’s multimedia works such as poodles, stiletto heels, masks, heraldry, and metamorphosed genitalia, these drawings were primarily produced by Jorge Zontal during group meetings. However, given General Idea’s mandate for co-authorship, as well as the circumstances under which they were executed, the drawings are considered to be collaborative. Although they are done entirely by hand, the repetition of specific motifs follows a viral logic that is akin to General Idea’s own penchant for mass reproduction. Seen together, these drawings are a fascinating window into General Idea’s distinct artistic vision as well as their unique notions of collaboration and co-authorship.

Living and working together as part of the late ’60s Toronto counterculture, AA Bronson (b. Michael Tims, 1946, Vancouver), Felix Partz (b. Ronald Gabe, 1945, Winnipeg; d. 1994), and Jorge Zontal (b. Slobodan Saia-Levy, 1944, Parma, Italy; d. 1994) eventually formalised their collaboration in 1970 into a single entity known as General Idea. From their earliest projects like the staging of The 1970 Miss General Idea Pageant to their late activist initiatives around the AIDS crisis (among their most famous projects is the 1983 re-envisioning of Robert Indiana’s LOVE print as a memetic icon referencing the recently-named syndrome), General Idea explored multimedia, conceptual, and performance work as a tool for engaging with common culture and its repressions. 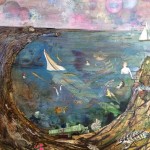