Reimagining the everyday world and creating a whimsical universe one deliberate brushstroke at a time, Jean Jullien sets out to actively participate in people’s lives by introducing a little creativity and fun to their daily environment. The artist’s 2016 exhibition ‘Flat Out’ saw the introduction of his signature “paper people” sculptures, which have since become an integral part of Jullien’s body of work, having evolved in many iterations over the years from paper to steel.

With this edition, it is the first time we see them as functional seating objects. In true Jean Jullien fashion, the seemingly simple characters succeed in conveying a spectrum of emotions. With a couple of expressive brushstrokes, the artist is able to instil each sculpture with a distinctive personality that is sure to conjure up a smile on the viewer’s face. These flat characters invite you to sit on their lap, relax and unwind.

Jean Jullien is a French graphic artist living and working in Paris.

Originally from Nantes, Jean completed a graphic design degree in Quimper before moving to London. He has since graduated from Central Saint Martins (2008) and from the Royal College of Art (2010). His practice ranges from painting and illustration to photography, video, costume, installations, books, posters and clothing to create a coherent yet eclectic body of work.

Jean has also published numerous books with acclaimed houses including Phaidon, Walker Books, Comme des Géants and Hato Press. In 2016, he published his first monograph with teNeues. He is represented in the UK by the Wylie Agency.

In 2011, Jean and his brother founded Nico Jullien Brothers, a duo specialized in moving image. For more information, go to: jullienbrothers.com

In 2012, he created News of the Times with Yann Le Bec and Gwendal Le Bec.

In 2016, Jean launched Nounou with Jae Huh, a Korea-based label producing a wide range of items including clothing, graphic objects, rugs and dolls. For more information on the latest collection, go to: nanny.kr 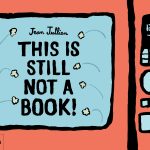 Jean Jullien: This Is Still Not A Book

With an inventive page design that inspires kids to play, This Is Still Not A Book invites readers to question what usually lies between two covers by transforming its pages into … 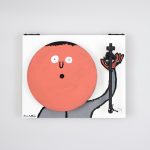