Food has always played a significant part in our cultural and social lifestyles. The depiction of food in art spans across cultures and all of human history. Aesthetic depictions of food make art accessible and intimate, reminding us of communal connectivity.

Western art popularized the depiction of food. Dutch and Flemish masters of the 17th century painted lavish and bountiful still lifes containing food and beverage such as exotic herbs, fruits, fowl, and shellfish. Other notable artists were some in the American Pop Art movement who were interested in mass culture. Artists such as Andy Warhol, Claes Oldenberg, and Wayne Thiebaud focused on highly accessible production line items like hamburgers, cakes, soda, and coffee.

Taiwanese-American artist Stephane H. Shih uses foods and beverage staples from households in the East and West to explore the diasporic nostalgia and material lineages of migration and colonization. Her work creates a statement about consumerism and its culture of abundance as well as calling attention to the influence that cultures can have on each other.

Shih’s most recent exhibition Open Sundays, at Harkawik in New York City, features 30 newly crafted ceramic sculptures that resemble street signs, shops signs, food, and beverages. These ceramics highlight a time and place within New York City where two communities lived and worked besides each other. Though the community had their differences the symbiotic relationships helped shape perspectives and menus.

Phillip Edward Spradley: Can you talk about the genesis of the title of your exhibition, Open Sundays?

Stephanie H. Shih: At the turn of the century, Chinese and Jewish immigrants shared the densely populated Lower East Side. As the two largest non-Christian communities in New York, they were among the only shopkeepers open for business on Sundays, when the rest of the city was observing the sabbath. Their proximity and occasional cultural similarities provided a jumping off point for the two communities to intersect and interact.

P.E.S: Research and the sourcing of archival material is the fulcrum to your work. You often search for classical and traditional packaging to highlight the time of place of a product. During your research for your current exhibition what information or piece of history did you come across that left an impression on you?

S.H.S: I loved learning about Bernstein-on-Essex, the first kosher Chinese restaurant—known colloquially at Schmulke Bernstein’s, though it was actually owned by his son Solomon. By the time it opened in 1959, Jewish families that otherwise kept Kosher were already eating at Chinese restaurants, referring to it as “safe treyf”. (The logic went that if you couldn’t easily identify the little bits of meat in your egg rolls or dumplings, who’s to say it wasn’t kosher?) The restaurant closed in the early 90s after Sol passed away, but there are still plenty of people in the city who remember going with their families growing up.

P.E.S: You have highlighted items that were imported from the East to the West, such as sesame oil, and also Western products that hold a place in Eastern cuisine, like Spam. What were the considerations made when deciding to focus on these relationships between the common household?

S.H.S: With so much talk online about what counts as ‘authentic’ food within a given immigrant cuisine (Chinese/Korean/Mexican/etc.), I think it’s important to remind ourselves that all cuisines have been touched by outside influences. Rejecting culinary evolution—or, dare I say the ‘F’ word, “fusion”—is an attempt to freeze a culture in time and declare that all influences that came before you are authentic but all influences that come after you are inauthentic. Banh mi is a product of French colonialism, and yet not one would say banh mi is not authentically Vietnamese.

P.E.S: As New Yorkers, regardless if you grew up here or flew here, regardless of race, color, or religion, there is a shared nostalgia and sense of community. Many people have a connection to Chinatown and Chinese cuisine. What do you want your audience to understand about the tradition of these common pantry items and how they affect our understanding of a culture?

S.H.S: In the same way that I’d love for people to stop having the authenticity fight, I don’t care how people use soy sauce. Use it any way you want to! Using it differently than I do, or than other Asian people do, does not mean you are misunderstanding or disrespecting a cuisine. It’s simply part of the evolution of culture and cuisine which is inevitable, and perhaps even beneficial.

P.E.S: Diaspora culture and homeland culture are slightly at odds with each other, fusion vs traditional. How do you think that might impact generational relationships within families, e.g., immigrant parents and first and second generation children?

S.H.S: While immigrants tend to seek assimilation—they chose to come here, after all, and they want to fit in—their second-generation American children are often chasing differentiation, an acknowledgement of their bothness. Can the first- and second-generation ever square such opposing views of identity? Maybe not. And maybe that’s OK. But, at the very least, there will always be a rift in understanding.

P.E.S: Your work invites an audience into your home, specifically your kitchen. Intimate domestic life has been a worthy source of inspiration for artists and have intrigued viewers who want to peer into familiar and unfamiliar spaces. How do you see the common practices of eating and togetherness assisting with socio-economic politics in our society?

S.H.S: Everyone has to eat, and there’s something undeniably powerful in that. Food holds a crazy amount of potential for how people relate to one another. But a lot comes down to what we choose to eat and who we choose to eat it with, and that can be quite telling.

P.E.S: What food items are you looking toward as you continue the conversation between art, food, and activism?

S.H.S: There’s an incredibly rich history embedded in San Francisco Chinatown, the oldest Chinese enclave in the United States, which I’ve started researching for my next series—but that’s all I can say for now. 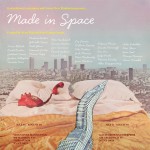 Preview: Opening 11th of July ‘Made in space’ @ Gavin Brown’s Enterprise and Venus over Manhattan in New York

Are you in New York this week- or anytime in the next month? What is exactly made in space? Curators Peter Harkawik
and Laura Owens attempt to answer this question in their massive group show ‘made in space’ opening this Thursday at Gavin Brown’s Enterprise in New York. Just to play with things made in space a little more, the show will also be running simultaneously at the Venus Over Manhattan.