Peres Projects will open AIRBAG, Rafa Silvares’ (b. 1984 in Santos, BR) second solo exhibition at the gallery. AIRBAG opens May 20th and will run until July 1st in their new space in Seoul.

A hum of optical vibrations oscillates this exhibition, comparable to that of a hushed auditorium awaiting the start of a performance. In a departure from his previous work, this new series discusses the interaction between stages of form, where abstraction versus figuration and organic shapes battle angular structures in a discursive debate. Revelling the tension between these two polarised components, Silvares positions himself as the conductor and referee in mediating the friction they permeate, whilst harmoniously diffusing them against one another. 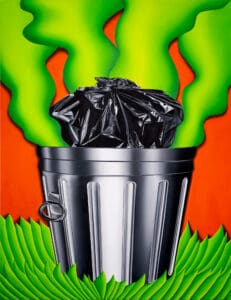