Vain Ego features a series of 108 ceramic heads described by Gough as an ‘Army of me’, as well as film, drawings and photographic prints. All the featured works were made during a 6-year period which was triggered by Yurim Gough’s breast cancer diagnosis in 2016, and her subsequent treatment and recovery.
During this challenging time, Gough sought solace in her work, expressing the emotions and experiences of her cancer treatment through life drawing and ceramics.

“The Vain Ego project was a 100% cathartic process. Focusing on creativity was a great tool to release emotions, weakness and pain, especially after I found that I had breast cancer and the subsequent treatment and recovery. I also got a strong spiritual feeling from the creative process and that I was able to survive from the cancer journey. Vain Ego consists of one word and depicts myself in the mirror looking for my ego. As the fight against cancer began, I drew my feelings, which changed from day to day, and I also drew my changing body nude onto a ceramic bowl. In addition, photographs and videos of myself at that time will also be presented for the first time in this exhibition.”

Gough is a talented fine art ceramicist who merges the draughtsmanship and gender-fluid mind-set of Grayson Perry with the autobiographical honesty of Tracey Emin. Gough was born in South Korea where she had a successful early career as a shoe designer, working in Tokyo and London, before moving to the UK where she pursued a career as a fine artist and ended up settling in Cambridge where she has a studio.

As well as the VainEgo exhibition at APT Gallery, curated by Lee Sharrock, Gough is going to be featured in a major group show at the prestigious Fondation d’entreprise Bernardaud in Limoges from June 2022 to April 2023. Limoges is the famed centre of ceramics where Picasso made some of his most iconic ceramic works. Gough will exhibit nine pieces from her Gender-Fluid series in Limoges. 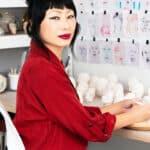