Showcasing 108 new paintings by the artist amassed from not less than 10 countries across almost all continents, Mr Doodle in Love is an unprecedented exhibition of such a large scale by the artist. Both black-and-white and coloured paintings are introduced, celebrating the artist’s romantic love journey evolving from the monotonous black-and-white tones to the present multi-coloured palette after marrying fellow artist Mrs Doodle (Alena Cox) in 2021. Visitors can immerse in Mr  Doodle’s super DoodleWorld and enjoy the surprises hidden all over Shanghai K11 by the artist, including surprise phone calls from Mr Doodle inside of the British-style doodled telephone booth installed on the GF of Shanghai K11.

“My intention has always been to create a universal doodle language that can relate to and attract people from all over the world,”

With love at the core and doodle as the medium, the exhibition traces the evolution of the lovebirds’ romantic journey through the use of colour which changes from monotonous black-and-white tones to the present colourful palette as their story unfolds. The works are arranged in chronological order, documenting the couple’s love journey, and the artist’s transformation in terms of subject matters, creative direction,  and the use of colours.

A featured section at the exhibition, The Mr Doodle Living Room, is adorned with doodle stickered walls and furniture, creating an immersive environment for visitors to soak in the super DoodleWorld filled with love and happiness. Visitors can participate in Mr Doodle’s creative process by adding stickers received upon entry to the walls and furniture.

Romance invades every corner of Shanghai K11 during the exhibition with Mr Doodle’s whimsical doodles noodling throughout. The classic English backdrop is a nod to the artist’s origin. Visitors may try their luck to see if they will receive surprise calls from Mr  Doodle inside of the British-style telephone booth on the GF of Shanghai K11, and Mr  Doodle will also receive the postcards collected from the visitors at the exhibition. On the 2F of Shanghai K11, there are romantic walls for visitors to doodle on with the crayons provided. Check out even more surprises from the featured programme A  Love Odyssey during the show!

Mr Doodle began consuming the Earth’s surface with doodles a little time after he was born in  1994. He started out by covering his parents’ furniture with doodles and eventually his whole  bedroom until he realised his home wasn’t a big enough canvas and he began doodling on the  walls of local fast food restaurants and schools. During his career, Mr Doodle has constructed  a whole new visual phenomenon: his DoodleWorld, where he manifests his vision of the world,  producing mesmerising and dense clusters of characters, objects and patterns that grow and  multiply relentlessly.

Mr Doodle began to garner recognition in the art world in 2017 and has since seen a meteoric  rise in interest in his work. He stands at the forefront of a new art wave, taking the online art  community by storm with a mass social media following. Truly a millennial artist, his works  provoke discourse on what we consider fine art today.

Mr Doodle’s works transcend beyond the canvas, invading furniture, big surfaces, clothing, and  more. Like other artists of his generation, he also explored a number of collaborations with  iconic brands, including Fendi, Puma, Samsung and MTV to begin with. But where Mr Doodle  separates himself is in his sense of purpose: a deep and obsessive compulsion to expand and  share his vision of his DoodleWorld. As a form of release or meditation, his process is fluid,  therapeutic, unrestrained, and without hesitation, as if channeling directly from his world into  ours with great stamina. He ultimately seeks to spread a sense of wonder, happiness, and love. “My intention has always been to create a universal doodle language that can relate to and  attract people from all over the world.” – Mr Doodle 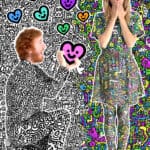 Love is in the air this summer as Mr Doodle prepares to marry the future Mrs Doodle and is set to release his limited edition, Pop Heart print collection and collector box editions. 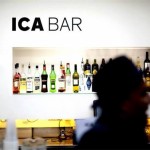 ICA will partner with Frieze and K11 Art Foundation to host the first official Frieze ICA Bar. Specially curated programme will feature special guests hosting evenings of music and guest DJs between the hours of 7.30pm – 1am.