Four Bedrooms With An En suite, A Garage & Garden In A Nice Neighbourhood - FAD Magazine
Skip to content

Four Bedrooms With An En suite, A Garage & Garden In A Nice Neighbourhood is a solo exhibition by Luton-based artist R.I.P. Germain created during his residency at V.O Curations. This new body of work, accompanied by an audio-guide, Plot Armour, produced with artist Deborah-Joyce Holman.

Each work surfaces specific instances of Black value systems in conflict with dominant white societal norms, and takes a forensic approach to their construction. These conflicts are physicalised as sites or scenes, populated by objects that serve as both indexes of and metonyms for the intense power dynamics at play. In delineating the cruel endgames involved in the consumption of Black culture under conditions that remain compliant with white hegemony, R.I.P. Germain continues his investigation into the mechanisms of power and oppression, and the disastrous consequences of these processes for Black self-determination and ultimately Black life.

In CJ (Keeping Up Appearances), R.I.P. Germain is concerned with conjuring and analysing moments in which figures, symbols and ideas from Black culture leave the sphere in which they start life, surface to white notice and are then consumed by white society. At the heart of this work is a framed photograph of a be-suited figure strutting through a white space, smoke billowing through the mouth and eyes of a silicone mask – a white Tupac Shakur, re-imagined and shot by R.I.P. Germain. The uneven but comprehensive co-option of this iconic Black figure is played out in CJ (Keeping Up Appearances), and the viewer is invited to follow the strange logics of the process in which white culture decides which parts of Black culture it will consume, and which it will discard, and to see the effective mangling of the original along the way. White Tupac is presented as a symbiote figure, and like the other items that comprise this work, the ‘mask’ is a surface banality that gives way at closer inspection to reveal a darker
heart.

A flag, made from skin-textured silicone scarified with bandana-paisley hangs from a black chrome stretcher – at once banal bar-room decor, and heavy, sinister flesh; braided hair terminating in Bo Derek beading connects the flag to a block of cake-soap, speaking to the acceleration of self-hating practises of skin-bleaching; the block of soap provides the cradle for an automatic-weapon, itself swaddled in a Salvation Army blanket, speaking to the threat that underscores the white ‘invitation’ to share Black culture, and the ultimate truth about where power lies in that supposed exchange.

With Jyrelle (“When It Rains…Niggas Get Wet, You Know?”), R.I.P. Germain flexes his wit, layering visual and verbal references to address the prevalence of drinking lean (codeine and promethazine mixed with soda) with a particular eye to its recent penetration of the UK Drill scene. The scaled-up ant bait station is a crisp white, labelled with a rich violet decal; it stands ready stocked with the drug, in cheerily refreshing emerald coloured Sprite bottles. The text on the decal underscores the chilling irony of poison that seems to be a panacea, willingly brought back to the nest to kill the whole colony. ‘Home Defence’ proclaims the text, echoing right-wing justifications for tactics used against an ‘other’ who is perceived to threaten the
fortress of the white home, society or self-conception; for lean drinkers ‘Home Defence’ might have a different resonance, speaking to an attempt at self-protection from trauma, a quieting of a troubled mind consumed by being besieged by opps, police and fans with their expectations of Drill artists performing their role as authentic, gladiatorial protagonists.

The sense of life in a crucible with little or no agency, and no escape without losing face, losing livelihood or losing life, underscores all the works. Opting out, or changing the terms of engagement is seen as going soft, or selling out; ‘fans’ expect nothing less than total existential commitment. In Mucktar ? Latwaan & Crosslon (? FAIR TRADE ?), R.I.P. Germain riffs off the hell money tradition of propitiating ancestors with paper money symbolic of sacrifice. Here, the money is printed with lyrics from notorious Kennington rapper MizOrMac (Mucktar), just released from prison:

Consumed by the logic of the world he finds himself in, cast in the role of relentless action hero, MizOrMac acknowledges it has damaged him mentally, ‘filled up with frightening plots’, a total obsession; despite being fresh out of prison, he’s got no interest in sex, understood among the (young, mostly male) fans as a strong and appropriate proof of commitment. The declaration that ‘we don’t splash and brag’ (i.e. attack enemies and then brag about it) rings futile – as he raps the words, the untruth of the declaration overwrites itself. As a hell money sacrifice, it’s not clear who Mucktar ? Latwaan & Crosslon (? FAIR TRADE ?) is propitiating: whether ancestors, record execs or a fan-base that is directly invested in Drill
artists really living the road-life, authentically enacting the content of the music – killing opps, trapping, getting arrested and going to prison – but it seems like Drill artists would recognise any one of the above as a hungry ghost.

By design it remains an open question as to how individuals will approach the works in Four Bedrooms With An En suite, A Garage & Garden In A Nice Neighbourhood, both physically and intellectually; R.I.P. Germain affords various ways in for a diversity of viewers – through spatial invitations and tacit temptations to step outside the conventional etiquette of art-viewing. Similarly, at times, the artist will be present and perhaps open to conversation, at other times he may be behind the earth mound, and may or may not be open to being disturbed. In a personal dialogue with trauma, the artist will be literally situated in the work “ALLAH Burned His Brain” in different ways depending on changing personal inclination, undercutting the idea of a single authoritative viewpoint as well as the stability of the work itself as an available entity for viewers. The correlate to this instability, however, is that the viewer does have agency in this exchange and different actions on their part will engender different experiences of the
work, different outcomes and different ‘enderstandings’. ‘EXERCISE’, London, 2022.

R.I.P. Germain’s practice traffics in double meanings, deep resonances and a tension between accessibility and occlusion. Trickster and guide, he tries to dance a fine line: making work that speaks to deep truths without cheapening them with explanations or flattening them out for easy consumption. Sedimented with layers dense with cultural meaning and reference, the extensive research undergirding R.I.P. Germain’s work draws from multiple genres of Black experience, history and culture – personal and collective, seeking to make art that is rigorous about his commitments and possibilities as a Black artist.
R.I.P. Germain has exhibited internationally and recent exhibitions include Supastore Southside, Slingbacks & Sunshine, a group show hosted by Sarah Staton at South London Gallery, Ways of Living #2, a group show presented by Arcadia Missa at NICO in Bari, Italy, Dead Yard, a solo show at Cubitt in London, UK, Double 6 with Ashley Holmes in the former courtroom at Leeds Town Hall in Leeds, UK, and Gidi Up, a solo show at Peak in London, UK. He has a forthcoming solo show in Leicester at Two Queens in Spring 2022 and is the recipient of the ICA Image Behaviour 2021 prize, which will culminate in a film that will premier in Spring 2022. 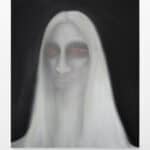 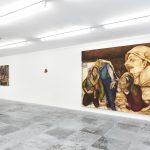 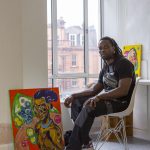 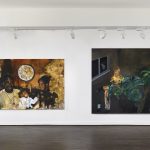