Curated by William Ling, Cork Street Attack will showcase new prints created from photographic evidence that recorded the immediate aftermath of the event alongside related artwork, ephemera and documents taken from the Grey Organisation archive kept by artist Toby Mott, the group’s spokesperson and central protagonist. The works span the breadth and depth of the group’s output, including drawings for the Labour Party’s 1985 election campaign, hand prints, calling cards, preparatory studies for De La Soul’s album cover ‘3 Feet High and Rising’, and photographs of a performance outside the ICA.

The Grey Organisation (GO) was a post-punk art collective that emerged from East London and Soho in the early 1980s, folding in 1991. Precursory to the advent of the YBAs (Young British Artists) and the arrival of big money in the artworld, the collective embraced anonymity and rejected the hero artist identity. With its blend of corporate yuppie culture and Soviet monoculture, it embodied a reflection of the status quo of the Cold War and Thatcher’s Britain in the 1980s.

The sombre dress code of its members; long dark overcoats worn over grey suits with a white shirt; top button fastened and no tie, was intentionally chosen to show no allegiance to any institution or group. Comprised of the painter Toby Mott (its co-founder and spokesperson), Daniel Saccoccio, nee Clegg Paul Spencer and the late Tim Burke (1963-2018] the GO lived together in an end of terrace house in Bow, East London, and became notorious for staging anarchic events.

These included an attack on a number of Mayfair galleries on Cork Street, then the epicentre of the London art world. Late one night, armed with buckets of grey paint, GO splattered the galleries plate glass windows in protest at their lack of support for emerging artists. This action resulted in a banning order from central London. With constant attention from the authorities following the attack, the collective re-located to New York to be represented by the East Village Civilian Warfare Gallery.

Other interventions included gate crashing the International Contemporary Art Fair at Olympia and participating in ‘The Money Show’ curated by J.S.G Boggs with their works ultimately being confiscated by Scotland Yard’s Counterfeiting Squad.

Exhibiting in London, New York, San Francisco and Tokyo the GO worked in mediums of painting, sculpture, film and video. The creative output of the GO is a baffling affair, transitioning from a post punk sensibility to late eighties post modernism, and incorporating traditional fine art practice, music, fashion, performance, video and commercial design.  The GO appeared in the works of Gilbert and George, modelled for Yohji Yamamoto and Katharine Hamnett were photographed by Robert Mapplethorpe, featured in numerous Derek Jarman films and were commissioned by The Labour Party and Swatch Watch to create artwork for use on posters and t-shirts. Later, they produced music videos and album design for artists connected with the burgeoning New York Hip Hop culture, most notably the design of Three Feet High and Rising for De La Soul.

GO early films were shown at institutions, including The London Filmmakers Co-op, Edinburgh Film Festival, the Tate, and ICA who, at that time, were engaged in showing much of the new video and film being made in the UK. Later on, film/video works were carried by Printed Matter in NY and their commercial work broadcast on the music cable channel MTV. Despite the diversity of the GO’s activity there was a unified sensibility around the individual’s positioning within the larger social and structural environments of the urban landscape. The focus of attention on emerging artists did not exist as it does today. What survives of its output, like their infamous Cork Street attack, is raw and uncompromising, embodying the rebellious spirit of their time.

Presenting a selection of original Grey Organisation works, paintings, drawings, artefacts and ephemera, the resolute nature of their practice reflected an ‘exister’ attitude, point of view and sensibility.

In 1985 I was a first-year student in the sculpture department at St. Martin’s. The course had just been joined to the same at Central. Both colleges were run by a broken Inner London Education Authority that would soon be disbanded and replaced by the short-lived London Institute, the precursor to the University of the Arts London, whose remit was to run the London art schools. It was then that I learned about the Grey Organisation and their Cork Street Attack. My impressionable young mind was rather captured by the spirit of their youthful rebellion and act of defiance in the face of an art world that seemed impenetrable.

Much later, I met Toby Mott, the group’s cornerstone and spokesperson who shared with me the backstory of the night in question and guided me through the GO archive. I proposed an exhibition and suggested that The Mayor Gallery would be the perfect place for it. If James Mayor, whose gallery was successfully targeted during the attack, could be persuaded to forgive and forget and host the show, it might be that the art world would slowly begin to grant GO the attention it deserves and recognise its historical significance.

Pasted onto the gallery walls, the exhibition presents new prints authorised by the Grey Organisation Archive, made using the photographs that documented the immediate aftermath of the attack.  From a group of artists, who refused to be rejected, disenfranchised, marginalised and ignored, these remarkable images record a released pent-up rage that exploded into an angry and violent splattering of paint on glass.

The prints are shown alongside artwork that span the breadth and depth of the group’s output; ephemera and documents taken from the Grey Organisation archive and kept by Mott, since the group disbanded in 1991. Included are drawings for the Labour Party’s 1985 election campaign, handprints, charge sheets, calling cards, preparatory studies for De La Soul’s album cover, ‘3 Feet High and Rising’, silhouette paintings and photographs of a performance/demonstration outside the ICA.

Talks at The Mayor Gallery:

Toby Mott is an artist, collector, designer, publisher and organiser of Cultural Traffic; a global arts fair that he founded as a platform for social change through DIY practice. In 1985 he led the Grey Organisation’s Cork Street Attack. Recent projects include the publication of; Punk in Print 1976-1980: The Compete Mott Collection, Kraftwerk: Dance Forever and Dictator Banknotes.

Peter York is an author, journalist, broadcaster, management consultant and President of The Media Society. His highly tuned antennae numbers him amongst the most perceptive commentators observing the cultural landscape. His latest book ‘The War Against the BBC’, co-written with Professor Patrick Barwise was published in November 2020 by Penguin.

Neal Brown is an artist and writer based in London. He has written for most UK art magazines and is the author of the book A New Concise Reference Dictionary. He was the writer in residence for the first Liverpool Biennial, and curated New Religious Art at the second. Brown also writes about punk.

Stewart Home is an artist, writer and activist who works in the Arts Council of England Collection. His literary works include, ’69 Things To Do With A Dead Princess’, ‘Tainted Love and ‘Brucesploitation And The Sleazy Joys Of Lowbrow Cinema’. 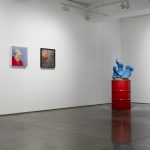 The Top 5 Art Exhibitions to see in London include A 50th anniversary, dating and reframing history.