Alex Israel x Snapchat have an exhibition at The Bass Museum of works that use Snap’s augmented reality (AR) technology to bring Alex Israel’s Self-Portraits to life.

Alex Israel x Snapchat is a unique collaboration between the Los Angeles-based artist and Snap. Invited to work with Snap’s advanced augmented reality team to expand upon his multi-disciplinary practice, Israel has created five augmented reality experiences, each linked to one of his Self-Portrait paintings. Five Lenses, unleashed in your smartphone, overlay Snap’s groundbreaking AR onto Israel’s physical works to give viewers an entirely new experience of painting. A site-specific sixth work leverages Snap’s Landmarker technology and interacts with the museum’s historic Art Deco façade. While Alex Israel x Snapchat debuted at the Cannes Lions International Festival of Creativity in 2019; this exhibition will unveil three brand new works and will be on view at The Bass in Miami Beach starting November 29 through May 1, 2022.

Alex Israel x Snapchat includes five of Israel’s iconic Self-Portraits, each enhanced by Snap’s Marker Tracking: technology that connects a digital, AR experience to a custom, physical object. The painted panels become portals to immersive, animated experiences. Self-Portrait (Drive) is a looping, psychedelic joyride through Israel and Snap’s hometown, Los Angeles. In other works, viewers will encounter the most ubiquitous of LA/Miami flora: a palm tree, a pelican by the sea, and a dancing avocado, each central to its own surreal adventure. A brand-new experience, Self-Portrait (The Painter), blends video and AR, with Israel performatively “painting” his Self-Portrait logo in digital light on a transparent fourth wall before magically breaking it.

Outside the museum, a site-specific sixth work uses Snap’s Landmarker technology and interacts with the museum’s historic Art Deco façade. Exaggerating the museum’s role as frame or vessel for art, Israel has repurposed the entire building as a pedestal for himself. Giant-sized and animated as a virtual sculpture, Israel’s avatar sits cross-legged, accompanied by Disney-esque critters in a pop-up enchanted forest, enlightened by a Baroque art history book.

For the last decade, Alex Israel’s art has embraced pop-culture as a global language. Trafficking in the invisible stardust of Hollywood and the detritus of film production—backdrops, sets and props—while riding the wave of the Internet and social media—as online talk-show host, eyewear and clothing designer, filmmaker and hologram—Israel’s art practice doubles as a brand, centered around a Southern Californian millennial lifestyle for which his iconic profile-in-shades-logo becomes a sly emblem, mobilized across high-visibility platforms from the worlds of art, entertainment, fashion and tech. Embedded within each of Israel’s endeavors is not only a landscape (of LA) and a portrait (of himself), but a cool and savvy meditation on a world fueled by celebrity, product placement and influence. A sort of sphinx behind dark lenses, the artist provokes an interrogation of the role of contemporary art in this new world. 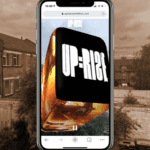