“I always thought it would be interesting to address people, the viewer, in a way that wasn’t preconditioned by the art context. We spend so many hours a day looking at screens – they are now a constant part of our lives, and to not make art for the screen would really be a missed opportunity.”

Salle’s NFT is a richly layered digital animation inspired by his acclaimed Tree of Life (2020-21) series, which is available for sale on SuperRare. Visitors to his exhibition can view A Well-Leafed Tree in the metaverse in the Museum of Crypto Art through VR.

“We developed DMINTI to help NFT art assume its rightful place in the cultural marketplace while aiding both artists and collectors keen to become part of this rapidly-evolving community. Our world-class team features experts from every aspect of the culture, crypto and NFT arenas. This uniquely positions DMINTI to partner with artists to make and exhibit culturally relevant and cutting edge projects.”

DMINTI aim is to be a first-of-its-kind company to recognize the seismic shift represented by the emergence of NFT art and the metaverse. The agency is platform-agnostic and partners with the world’s leading contemporary and emerging artists in the digital and traditional art worlds; to support them with the best tools available to produce, exhibit,  and market unique, culturally relevant NFT and Web3 projects. Its curatorial team has over half a century of collective experience working with artists in the museum and gallery context, producing exhibitions, commissions, and publications. DMINTI is launching with a prominent roster of artist partners including a diverse and intergenerational range of celebrated talents such as David Salle, Oscar Murillo, Sarah Morris, Sarah Meyohas, and others to come. DMINTI’s creative team includes former Artistic Director and Chief Curator of the Guggenheim Museum Nancy Spector, tech entrepreneur and author QuHarrison Terry, and Museum of Crypto Art director and co-founder Colborn Bell–straddling the worlds of traditional- and cryptoart.

David Salle’s paintings are immediately recognisable for their juxtaposition of contrasting visual elements that he appropriates from popular culture, spanning cartoon imagery, advertising, graffiti and the history of art. By combining seemingly unrelated images in diverse representational styles that seem to float past one another in virtual space, he plays with viewers’ aesthetic expectations and sense of perspective. Using cinematic techniques such as montage and superimposition, he creates a world of simultaneity and equilibrium that establishes dynamic and even absurd relationships. The artist reflects on the constant input of images and ideas from the media-dominated world, which become part of the collective consciousness and, in turn, influence our own sense of self.

For Salle, painting – like language or poetry – emphasises the counterbalancing of contrasting elements: ‘compression, juxtaposition, simultaneity, resistance to closure, dissonance […] It makes free use of surprising and abrupt transitions and juxtapositions. It seeks to distil entire blocks of emotion and complex experiences into the telling detail, the closely observed fragment that stands in for the whole.’ Containing allusions to Pop art, Surrealism and Abstract Expressionism, as well as cartoons from the 1950s and 1960s, his works combine various iconographies and formal qualities. Their kaleidoscopic effects seem to reflect a constant stream of simultaneous thoughts, feelings and visuals, constituting a humorous and even ironic commentary on contemporary life and the status of painting itself. ropac.net/david-salle/ 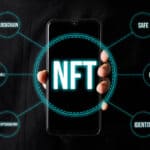 What’s the right answer when it comes to NFTs?