See Rankin's latest series of work in his own space. - FAD Magazine
Skip to content

This weekend you have the chance to see two of Rankin’s latest series of works Embrace and An Exploding World that explore the intersection between art, creativity and mental health as he opens up his Kentish Town Studio in celebration of Photo London 2021.

After a year of concern, closed doors and isolation, Annroy studio, alongside Rankin’s new concept in luxury accommodation, The Penthouse Salon, are opening their doors and sharing the power of creativity to help ease the apocalyptic anxiety prevalent across contemporary culture.

Close-up and intimate, these series of images reflect the state of the nation and Rankin’s own self-reflexive take on isolation and lock-down through the photography of flowers.

Embrace, showcases a brand new series of artworks, created by the photographer during lockdown. Close-up
and intimate, this series of images reflects the state of the nation and Rankin’s own self-reflexive take on isolation and
lock-down through the photography of flowers.

Self-isolation gave me an opportunity to really focus on this work as I’d imagined it. What’s interesting
about these images is how much they reflect my personal state of mind, whilst also in representing my approach to
the world. In taking each picture I realised right from the beginning that I was treating them like a portrait. Whether
that was of single flowers or groups, I couldn’t help but give them characters. Search for their personalities and try
to bring them to life.

A companion series to Embrace, these new pieces, titled An Exploding World, explore the aesthetic of destruction,
creating images reminiscent of nuclear explosions. Each frame becoming a take on an expression of Rankin’s
frustration during isolation, and the expressive creativity that emerged.

“For years now I’ve been obsessed with the perfection of a dandelion seed head. Seen as weeds, they grow absolutely everywhere, especially in the city. And during a time of great stress, there was comfort in them. Especially as growing up the idea of blowing them was associated with making a wish.”

Rankin and his team will also be hosting a series of events across the weekend; including a book signing, afternoon tea, live talk and mindfulness event – bringing well being to the forefront of the contemporary art world.

The Penthouse Salon, this revolutionary new space is one part art gallery and one part luxury accommodation.
Designed by Rankin, in conjunction with his long-term architect, The Penthouse Salon promises to be the perfect place to entertain, party and even take photographs. Sitting above Rankin’s long-term photographic studio, this contemporary location space is designed with flexibility at its heart, perfect for creative projects and relaxing nights away.

*All events require an RSVP open to the public, but spaces may be limited.
RSVP beverley@beverleyluckings.com 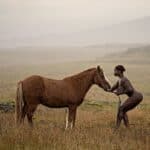