TALKING LOUD will see local, national and international designers, architects, artists, makers and more reflecting on their experiences, ethos, philosophy and ways of working. The sessions, which are part of the South East Creatives programme, aim to support those in the creative, cultural and digital sectors by giving them the opportunity to gain insights and inspiration to help take their own business or practice forward

These talks are aimed at those people currently working in the creative industries in the South East, but free and open all.

The first three talks are now open for bookings and include the following conversational pairings. Further talks will be announced shortly which will run across the Spring.

Thursday 18 February 2:00pm   Free
Helen Cammock and Tai Shani – who jointly won the Turner Prize in 2019 with Oscar Murillo and Laurence Abu Hamdan – will discuss their breadth of experience as visual artists, including developing and maintaining their practice in the current climate and activating collaborations with, and supporting peer networks.

Thursday 25 February  2.00pm  Free
Giles Smith, a founding member of Assemble, will discuss the award-winning architecture, design and art collective’s origins, ethos and evolution, their ongoing Sugarhouse Studios project to provide affordable creative workspace which has been involved in the development of Bexhill Creative Workspace and his perspective on the pandemic.

More Info and to book a FREE place: townereastbourne.org.uk/talks 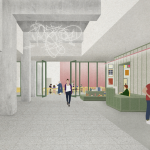 Towner Eastbourne has been successful in securing a further £341,000 from ACE towards the redevelopment. 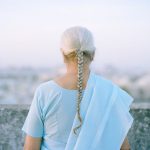 Towner International is a new biennial exhibition of contemporary art.

Towner International is a new biennial exhibition of contemporary art that will take place for the first time at Towner Eastbourne from 6th October 2020 to 10th January 2021.

The outdoor commission Dance Diagonal by Lothar Gotz is to stay at Towner Eastbourne until Spring 2021
Towner Eastbourne, an iconic building on the South Coast between the sea and the South Downs, became the canvas for the largest outdoor mural in the United Kingdom in 2019. 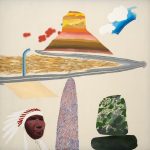 Towner Eastbourne have announced a major exhibition of early works by Alan Davie (1920–2014) and David Hockney (b.1937) that will explore the convergence between the two major figures of post-war British painting.